Mary caught a centipede in the house, and I was going to take a quick picture of it…but it was way too active. So I had the bright idea of bringing it to the lab, and just carry it outside as I walked in. I had it in a large plastic container that I figured would provide some thermal insulation.

It was not enough.

Before I reached the end of the driveway, it was immobile — that was less than a minute. It took another 3 or 4 minutes to get to work, and it looked dead and frozen. I took a picture anyway. This is a sad, corpselike centipede. Whoops. I was pretty sure I’d killed it with surprising speed. I guess -20°C isn’t healthy for small invertebrates. 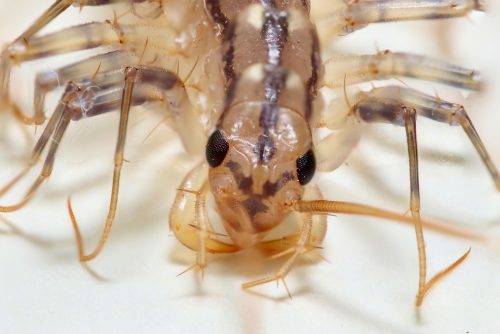 And then it started twitching as it warmed up. Now it’s fully recovered. I guess centipedes are harder to kill than I thought.

A tiny glimmering of good news » « It’s WAR in Europe