What a way to spread the reputation of your town. New Prague High School, a little place southwest of Minneapolis, hosted a girl’s basketball game, and the spectators started taunting the players from the Robbinsdale team.

Some people in a high school basketball crowd are being accused of taunting visiting players, many of whom are students of color, with monkey noises during a close game.

The racist chants happened at the girl’s basketball game between Robbinsdale Cooper and New Prague in New Prague Tuesday night, according to accounts.

This seems to be a habit at New Prague.

Damian Johnson, head boy’s basketball coach at Benilde St.-Margaret’s and former Gopher, said on Twitter he “wasn’t surprised at all” to hear Williamson’s claims. He told Bring Me The News that during a Jan. 31 game between the Benilde and New Prague 9B teams, two girls in the stands referred to a Benilde player as a “monkey” while he shot free throws.

Other schools are responding strongly.

In a response to alleged racist taunts during a Feb. 15 high school boys hockey game, St. Louis Park will not compete in any contests against New Prague for at least until the end of the school year.

In an email to New Prague athletics director Brad Skogerboe sent on Monday, St. Louis Park AD Andrew Ewald said the ban “will continue until the harm that was caused is repaired and we are assured that any of our stakeholders, most importantly our students, will not be victimized by racism by any New Prague stakeholder in the future.” 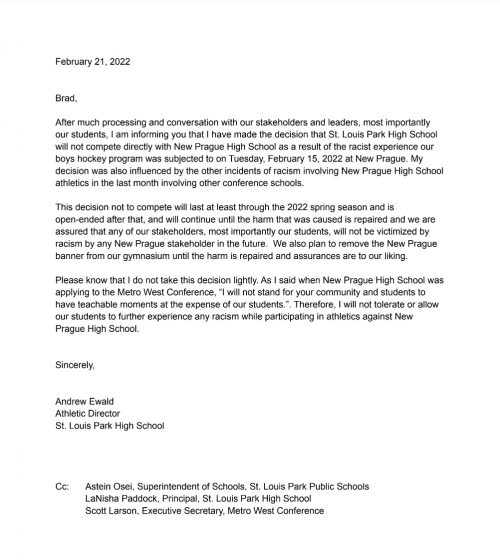 But wait — that seems backward. The schools with black students are canceling their competitions with New Prague? Does that mean the racist high school wins in a forfeit? The penalty ought to be that New Prague is not allowed to compete. Further, apparently New Prague only recently applied to, and was accepted into, the West Metro conference. Kick them out. There’s no excuse for tolerating that kind of behavior.