Eight years ago, Bill Nye and Ken Ham met to debate evolution vs. creationism. They engaged in the Creation Museum, which was a big mistake — never willingly give the home court advantage to your opponent. Nevertheless, if you ask any biologist how it went, they’ll mostly agree that Nye kicked Ham’s ass. The low point for the creationist was when he proudly declaimed that no amount of evidence could ever convince him he was wrong, because the Bible was absolute truth.

However, even now Ken Ham brags about the debate. He and his followers think he trounced Nye, and specifically think his testimony about the infallibility of the Bible was a clincher. Ham isn’t hiding in shame, he still trumpets the debate regularly. 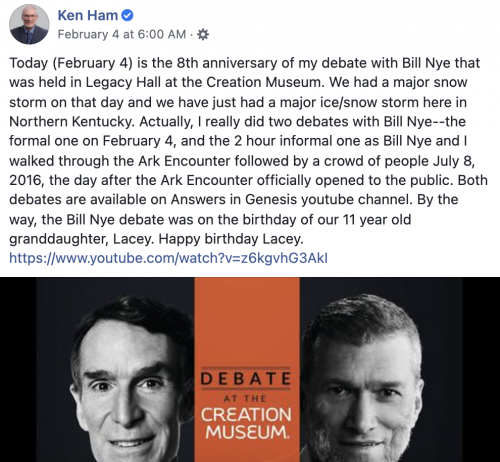 He didn’t learn a thing, but neither did many people on the other side. I’m still seeing people lining up to debate Kent Hovind, or Standing For Truth (if you don’t know him, he’s a fraud on YouTube) or the “Great” Debate Community, or any of these yahoos whose ticket to traffic on social media is to host debates on “controversial” topics, which usually means putting up an idiot on equal standing with someone supporting conventional science. The more absurd their position, the more inane their response, the more conflict they generate and the more traffic they get.

The loser is always the person who gives respectability to the kook at the other lectern. Learn from this. It doesn’t matter how slick, professional, and clever you are in your side of the debate — at the end of the day, the winner is going to be the one who praises Jesus the most.

All right, all right, I guess there are legit reasons some people fear spiders » « I miss the tetragnathids