There’s a pointless wrangle going on in this thread about the slogan “Defund the police”, which CripDyke also addresses reasonably on the Pervert Justice blog. DILLIGAF, people. ACAB. Defund the police, whatever that means to you. Change is necessary. That’s where the focus ought to be, not on the pedantry of how the demand is phrased, but recognizing the reality of how awful the police are in this country.

For example, here’s the story of the NYPD police squad rousting black teenagers on Halloween, even hitting one of them with their car. A civilian review board found that the police were out of line, so the police voided their conclusion and said they’d handle it entirely internally. These are the kinds of people we’re looking at.

One of the officers, the report noted, was wearing a sweatshirt with a logo of the Punisher, a Marvel character who kills lawbreakers, which is popular with cops and white nationalists. The sweatshirt also had a blue line over the American flag and the acronym DILLIGAF. (“Do I Look Like I Give a Fuck.”) The officer told investigators he hadn’t known the meaning of the logo or the acronym on his sweatshirt.

Isn’t that charming. That’s the face of the police they are proud to present.

You might wonder what’s happened to the bad cops. Here you go:

Officer Christopher Brower drove into the boy, according to the report. Officer Christopher Digioia wore the Punisher sweatshirt and is the one officer still facing a disciplinary trial, for allegedly swearing at the teens. A search of their respective CCRB files shows they were also disciplined for another case together. Investigators found that, in April 2019, about six months before the Halloween incident, the two had refused to provide their names or badge numbers to a civilian. The NYPD penalized them for that with “instructions.”

The precinct commander who the CCRB concluded oversaw the wrongful arrests is Inspector Megan O’Malley. She told investigators she believed the arrests were justified because the boys ran and one had dropped a kitchen knife. O’Malley has since been promoted and now heads a precinct in midtown Manhattan.

The officer who, the report said, first ordered the boys to be stopped and then pointed a gun at one of them is Lt. John Dasaro. He told investigators he had been worried that the boy was armed. Dasaro was moved to work at the internal affairs unit that investigates use of force against civilians.

It’s not just big city problems. Here’s the story of Brookside, Alabama, a little tiny town like a model Mayberry.

The town of 1,253 just north of Birmingham reported just 55 serious crimes to the state in the entire eight year period between 2011 and 2018 – none of them homicide or rape. But in 2018 it began building a police empire, hiring more and more officers to blanket its six miles of roads and mile-and-a-half jurisdiction on Interstate 22.

The growth has come with trouble to match. Brookside officers have been accused in lawsuits of fabricating charges, using racist language and “making up laws” to stack counts on passersby. Defendants must pay thousands in fines and fees – or pay for costly appeals to state court – and poorer residents or passersby fall into patterns of debt they cannot easily escape.

“Brookside is a poster child for policing for profit,” said Carla Crowder, the director of Alabama Appleseed Center for Law & Justice, a nonprofit devoted to justice and equity. “We are not safer because of it.”

Defund the police. Does anyone want to argue that at least Brookside is one place that needs savage cuts to police funding? Anyone? They expanded the police force ten fold, and the town wants to increase it even more. Look at what they have now! 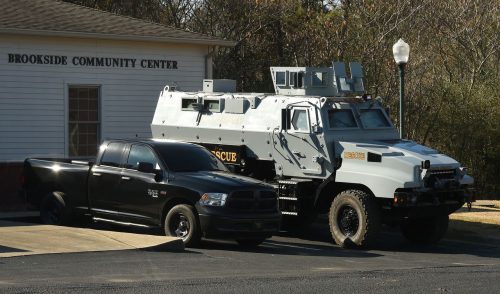 This is indefensible. Defunding is the answer.