You should be outraged at Tennessee schools banning Maus. I know I am.

A school district in Tennessee banned the use of “Maus,” a Pulitzer-winning graphic novel about the Holocaust, in its middle school classes, citing the work’s profanity and nudity in a 10-to-0 vote.

As leaders in conservative areas across the country push for more control over the way history is taught, the McMinn County school board expressed concern that the expletives in “Maus” were inappropriate for eighth-graders. Members also said Art Spiegelman’s illustrations showing nudity — which depict Holocaust victims forced to strip during their internment in Nazi concentration camps — were improper.

How do you show the horror of the Holocaust in a “proper” way? You just have to sanitize out the “horror” part? That’s the whole point of educating kids about this event — you have to make it clear that this wasn’t a trivial, fun, amusing event. You can’t clean it up. It’s why Spiegelman has refused to turn it into a movie. 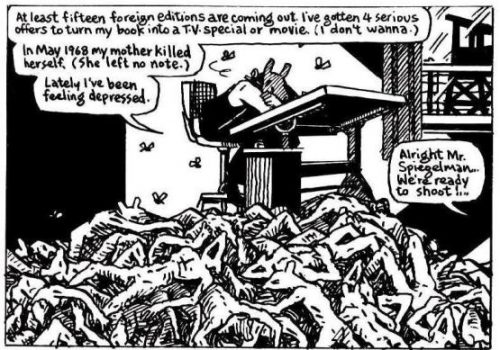 The school board’s objections are ludicrous. It’s got expletives in it — have they ever listened to eighth-graders? As a kid, I didn’t learn dirty words from a book, or my family, I got them from my peers. The naughty words in Maus are relatively tame against the magnitude of the nightmare going on around the characters. Nudity? Hah. People being forced to line up for mandatory showers (does the school district have communal showers in their PE building?) or piles of naked corpses are not images that will make the kids think of forbidden sexy times.

The most chilling part of the article, though, is the mention of the “10-to-0 vote”. No one on that school board was principled enough to speak out against the banning, the whole board was depressingly uniform in their views. That speaks to the effectiveness of the deranged Right in infiltrating our civic life to take control and further poison our communities with their oppressive ideas. We have seen the same phenomenon in the teaching of creationism — the teachers are dead set against it, many of the citizens don’t want it, the institutions of higher learning all reject it and say teaching it is a waste of time, but all you need is a bloc of churches voting to pack the board, and they can dominate.