The past few weeks in my cell biology course have been dedicated to an introduction to DNA: structure, replication, and transcription. I’ve thrown a lot of stuff at the students, but I’m ready to move on to other fun stuff, like developmental regulation and evolutionary origins, but I may have to go back and revise everything I said. I neglected to consult the source of all knowledge, Facebook, and there are so many True Facts I failed to communicate. 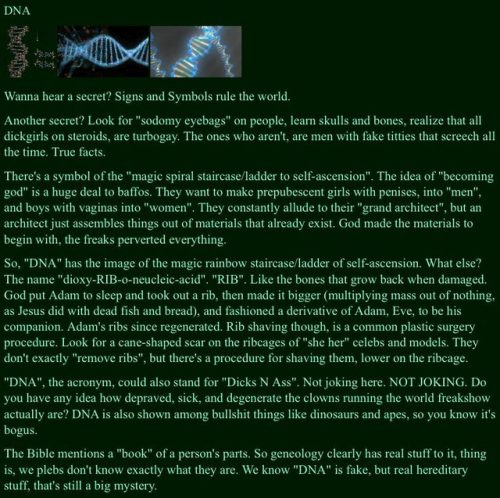 We know this is truth, because he says it is. Also NOT JOKING. I had no idea that DNA had so much fuel for trans- and homo-phobic interpretations. I’m also always entertained by by folk etymology.

Dioxy-RIB-o-neuclic-acid [sic] is not a reference to ribs. It does refer to a 5-carbon sugar, ribose, that can be extracted from gum arabic, and is related to another sugar, arabinose, that got strangely contracted and mangled by a chemist sometime in the 19th century to “ribose”. It has nothing to do with ribs. In particular, it has nothing to do with the cosmetic surgery of rib shaving, which is done to narrow the waistline of both men and women, but somehow you’ve got to incorporate a raging transphobic obsession into the storytelling.

DNA is also not an acronym for “Dicks N Ass”. It wasn’t named by depraved, sick, and degenerate clowns. That’s a privilege reserved for the people who invent pseudoscience on Facebook. You know, the ones who complain about “sodomy eyebags” and “turbogay”.

What baffles me, though, is that after that silly rant misinterpreting DNA to distort it into support for the author’s weird hatred of gay and trans folk, he announces that DNA is bogus and fake, because it’s found in bullshit things like dinosaurs and apes, and that DNA has nothing to do with heredity. So why is he making up stories about DNA in the first place?

Always label every bottle » « Oh no, now #UATX is getting slammed by satire