I didn’t know Leslie Cannold had an agony aunt column. Let’s take a look at it. 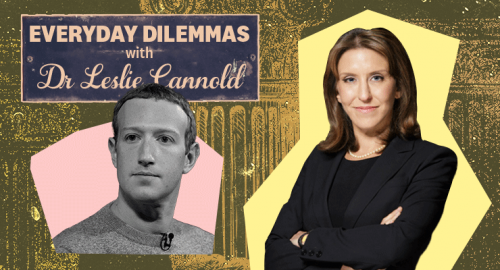 This week, she’s asked by someone if they should quit Facebook. Her answer is yes.

I’m inclined to say yes, everyone should quit Facebook (or is that Meta?) because it’s a determinedly monopolistic and rabidly self-interested company that does little good and a whole lot of terrible in the world. This includes commodifying our personal information, allowing misinformation to flourish and algorithmically encouraging the political radicalisation of users, all of which is like rat poison to democracy.

Why give your time, attention or custom to that?

I agree. It’s why I finally quit Zuckerberg, may he rot in hell.

But Cannold should have stopped there, because…

Having said that, I confess that while I despise Facebook, I’m still on it. Why? Because in the same way you are attached to the events page, I am served by being able to promote my writing to followers that right now I can’t reach anywhere else.

In part, that’s the fault of Facebook and the other big tech monoliths too, who have done all they can to gobble up competitors who did or might have provided something better like Instagram and WhatsApp while monopoly regulators did — and continue to do — nothing.

LinkedIn offers the best alternative to date. A different business model but the same gender breakdown of users and an events feature, though the average user age is older. However, if that’s not an issue for you and those you plan events will come with you, maybe give that a try?

Yikes. Step back and look at what you’ve written, Dr Cannold! You’ve just told someone else they should quit Facebook because it’s “a determinedly monopolistic and rabidly self-interested company that does little good and a whole lot of terrible in the world”, and then immediately said it’s fine for you. Way to totally undercut your own advice. It may be “rat poison to democracy”, but you’re going to continue to consume it while telling everyone else to eschew the warfarin.

I know I stayed on for far too long, because I had connections to family and friends there, but at least I wasn’t telling everyone else they should get off while making excuses for myself.