Uh-oh, curmudgeon alert. Everyone has been sending me this article, “Spiders are much smarter than you think”. It’s a good article. It’s just that a few things about it set me on edge.

Smarter than I think? You don’t know what I think. I already have a high opinion of spider intelligence. But OK, they’re doing good work to spread the news about the abilities of spiders. You should read it if you don’t already know about it.

I’m also bothered by the word “smarter”. We can’t quantify intelligence! Not in people, not in spiders, not in anything. We can isolate bits and pieces of aspects of intelligence, and measure some of it, but “intelligence” in the broad sense is multifactorial and hard to pin down. What the article actually describes is behavioral adaptability and the capacity to model their environment. Spiders can do that! By studying them, we can discover interesting things about how they do that.

Another concern is that the article is almost entirely about a single species, Portia. 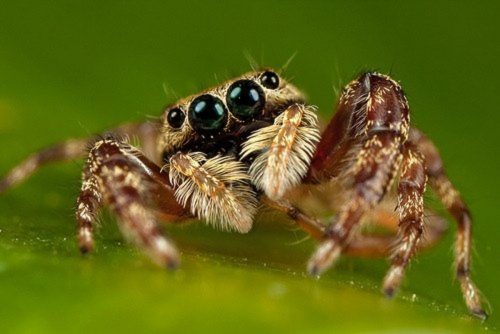 No fair! Jumping spiders are a kind of charismatic microfauna, cute and pretty. They are active predators, too, which tends to bias our impressions of their human-like behaviors. We are self-selecting for what we quantify as “smart”, which is often a word meaning “human-like”. A lot of spiders, though, are ambush predators who have a different suite of behaviors. Are they less smart? A black widow that left its web to chase prey on foot would be less “smart”, but we might judge it as more in alignment with our expectations.

I do very much agree with these sentiments, though.

“There is this general idea that probably spiders are too small, that you need some kind of a critical mass of brain tissue to be able to perform complex behaviors,” says arachnologist and evolutionary biologist Dimitar Dimitrov of the University Museum of Bergen in Norway. “But I think spiders are one case where this general idea is challenged. Some small things are actually capable of doing very complex stuff.”

Behaviors that can be described as “cognitive,” as opposed to automatic responses, could be fairly common among spiders, says Dimitrov, coauthor of a study on spider diversity published in the 2021 Annual Review of Entomology. From orb weavers that adjust the way they build their webs based on the type of prey they are catching to ghost spiders that can learn to associate a reward with the smell of vanilla, there’s more going on in spider brains than they commonly get credit for.

“It’s not so much the size of the brain that matters, but what the animal can do with what it’s got,” says arachnologist Fiona Cross of the University of Canterbury in Christchurch, New Zealand.

Yes! So let’s avoid judging animals whether they are smarter or dumber.