I slummed it a bit this morning, watching a video by Dr. (he really is, with a Ph.D. from a credible institution) Robert Carter, who provocatively promised to tell me about Genetics According to Jesus. That got me curious. Jesus didn’t say anything about genetics — he couldn’t. The science wasn’t invented until, really, the 20th century, and the ancient world had only the vaguest notions of how heredity might work. There was only some general, obvious ideas about how there are familial similarities and unpredictable variations — difficult to dissect soup of commonalities and diversity. It took a novel approach to figure it out, exemplified by Mendel, who reduced everything to a simple organism and simple variants, and applied principles of probability and statistics to discern any pattern. Nobody did that before in any systematic way, and a lot of great minds had very crude ideas about how inheritance worked. Aristotle assumed it was all about a dominant male principle that organized the chaotic curdled menstrual blood of the female into an embryo, for instance. So Jesus, a non-scientist, said something about it, huh? OK, give it to me, Bob. I’m curious.

Would you be surprised if I told you that nowhere in this hour-long talk does Carter say anything about genetics from the Gospels? No? Yeah, predictable. Here’s a quick summary of what he does say, so you can skip the whole video.

The first 10 minutes is classic creationist time-wasting. He tells us about his grandparents, where they were from, what they did, all irrelevant to any point he might make. It’s a common trope in creationist talks, though — you start by giving your come-to-jesus biography, because how can anyone trust you if you don’t present your bona fides?

There’s a quickly abandoned moment where he talks about his education in genetics, and he mentions that the tools of genetics have such power that they raise significant ethical questions…which he immediately resolves with a quote from Genesis, the dominion mandate, in which God hands over control of all of creation to Adam. That’s a little bit scary. If fundamentalist Christians were in charge of the institution of science, I guess it would be carte blanche, that you get to do anything you want to non-human organisms, because God said so.

He also takes a moment to condemn Francis Collins, who isn’t Christian enough for him. Collins believes humans evolved 100,000 or more years ago, from a population of tens of thousands of individuals, not just two, therefore he’s not really a True Evangelical Christian™, I guess. True Christians interpret the Bible literally and know that the Earth is less than ten thousand years old (even though the Bible doesn’t say that) and that Adam and Eve were the progenitors of the human race, no one else (even though the Bible has the curious problem of their sons somehow finding wives). Cue the usual “but if Adam didn’t exist, then Jesus couldn’t have saved the world” etc. etc. etc.

Then we finally get the gist of his story. In the first half of the 20th century and before, anthropologists were all horrible stomach-turning racists, but the Bible-believers were egalitarian believers in the unity of mankind. He will not discuss the racist apologetics of American slave-holders, or that many of those anthropologists were themselves Christian, and he only praises the flood of European missionaries who invaded Africa because, after all, they were Christianizing the continent.

After chewing out those evil bigoted scientists, though, he spends most of the rest of his time talking about…race. Not Jesus, or genetics, just race, and he does so in the most trivializing way. Adam and Eve had to be brown, because you can get all the colors of modern humans with nothing but different degrees of melanization. He shows a few human cladograms (science!) and points out that all the branches radiate from a common point, therefore, as predicted by the Bible, that point was Noah and his sons. (After all, I guess evolution wouldn’t predict common ancestry, only the Bible does that.) It’s a half-hour of cherry-picking and bogus interpretations of the evidence — he doesn’t mention that that central point for the radiation of all the races of mankind was not 4000 years ago, but far, far older. He can get away with that because he announces that molecular clocks don’t work, most conveniently. He gets to ignore lots of evidence to fit a few diagrams to his Biblical model.

He can’t even cite the New Testament, let alone the words of Jesus Christ, geneticist, to back up his arguments. THE TITLE IS A LIE. I was so disappointed. I want my money back and my time.

There was absolutely nothing of substance in the talk that I could sink my teeth into, just the usual creationist fallacies and dishonesty. That’s boring, and no fun at all. I tried to find anything that hasn’t been debunked a thousand times before, and perked up at only one claim I hadn’t seen before, at about the 25 minute mark.

In Great Britain, most of the birth defects and developmental abnormalities of children in their health system are from Muslims, because the Muslim tradition is to marry a first cousin.

Wait, wait — you’re telling me the majority of birth defects in Great Britain arise in a small subpopulation of 3 million out of about 65 million? No way. I know a bit about developmental defects, and that sounds ridiculous. I understand that there is a higher degree of consanguinity in marriages within that subpopulation, and that inbreeding does increase the incidence of birth defects, but not that much, and it seems like an unfounded dig. It was a novel claim to me, even if it was totally fucking irrelevant to any putative claim about Jesus genetics, so I thought I’d look it up.

I should have known, though. Google the claim and what you get is a lot of garbage from sources like the Daily Mail, who love to claim that the invading Muslim hordes are just dumping defective babies on the NHS. It’s a racist claim from racists, so why is this nominally anti-racist creationist blithely echoing them? Time to go to the actual scientific literature and figure out what the data actually says.

Here’s one: “A reconsideration of the factors affecting birth outcome in Pakistani Muslim families in Britain”, by SR Proctor and IJ Smith. I guess they were familiar with the misinformation peddled by British tabloids, so they had to go debunk them.

Abstract
Over recent years, Bradford has had a consistently high perinatal mortality rate (PNMR), especially amongst its Asian population, 66% of whom originate from Pakistan. There is a high incidence of consanguineous marriages reported among Pakistani and Muslim couples. Often, this observation is used to explain their higher PNMR and congenital malformation rates. The factors affecting birth outcome in Pakistani women are complex and interrelated. Socioeconomic, genetic, biological and environmental factors all contribute to adverse birth outcome. In addition, these are complicated by discrimination, communication barriers and culture blaming. The aim of this paper is to challenge midwives and other health professionals to reconsider the overwhelming emphasis placed on consanguinity as a factor affecting birth outcome, and to recognise the impact and interplay of other confounding variables.

The point of the paper is to show that you can’t explain away infant mortality and malformations by blaming it on arranged marriages. If you want to try to do that, you have to ignore all the other factors that contribute to that rate, like diet and poverty and unequal access to health care. Anyone who has studied development at all knows all this — it’s multifactorial, and trying to pin problems to a single cause like inbreeding or race or religion is going to blow up in your face. This is a simple diagram of a few of the inputs to birth outcomes. 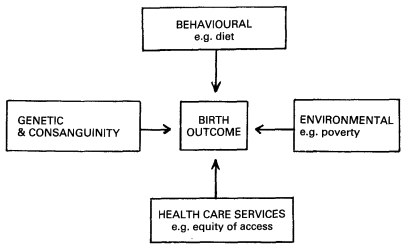 It is definitely true that consanguineous marriages do increase the rate of birth defects and perinatal mortality, but you’re committing a racism, Robert, when you gloss over the many and more significant factors that contribute to the problem.

Pregnant, Asian women who register with a GP who is not on the local obstetric list have a two-fold increased risk in having a perinatal death compared to a listed GP (Clark & Clayton, 1983). Midwives have also been criticised for being ignorant about the cultural beliefs of their clients and being reluctant to use locally available advisory groups (Kroll, 1990). Hospital service utilisation has also been reduced with low uptake of amniocentesis reported from Sheffield and Birmingham (Little & Nicoll, 1988). This was attributed to late antenatal booking and language difficulties. Antenatal clinical attendance has improved in some districts since the introduction of liaison workers who act more as advocates than literal translators (Raphael-Left, 1991).

As with indigenous white women the factors that affect birth outcome in Pakistani women are complex and interrelated. Major socio-economic and environmental problems have been reported which are not always disentangled from the obvious adverse factors, for example consanguinity and diet. Moreover, they are also complicated by communication barriers, discrimination, culture-blaming and, if consanguinity is present, victim-blaming. If little or no English is understood then there will be a tendency to label the women as deviants who may become stereotyped.

What this is an example of is the tendency of creationists to ignore the bulk of the evidence that defeats their claims to cherry pick the bits and pieces that they can warp to fit their misbegotten nonsense of a “theory”. Sure, we can ignore culture and language and poverty so we can argue that Muslims are inbred, just like we can ignore the breadth of genetic evidence to claim all humans are descended from one family four thousand years ago, or one couple six thousand years ago, and then turn around and claim that it’s true because Jesus said so.

I’m still waiting to see that verse from the Bible where Jesus talks about allele frequencies.

Ho ho ho, Muad’Dib » « Shouldn’t you be brought up short if you find yourself agreeing with Putin?