Louis CK remains the king — wow, but that guy destroyed his reputation spectacularly — but it looks like Dave Chappelle is working hard to catch up. Where once I could respect him for the ol’ “speaking truth to power” routine and his sometimes exceedingly edgy comedy, I guess he found that work too taxing and has decided it’s easier to punch down and start mocking the trans community, while getting highly paid by Netflix.

Netflix, unfortunately, has so much money that quality doesn’t matter anymore — they’ll greenlight anything. I’ve learned that any science-fiction movie promoted by Netflix is going to be mostly garbage, so I’ve been skipping the service more and more. Comedy specials are even worse. They’re ridiculously cheap to make, so it seems that any bigot who wants to make other bigots laugh will get handed a platform. There are exceptions, of course. Netflix put on Hannah Gadsby, who was marvelous and thought-provoking, but that was a rare occasion in a sea of same ol’, same ol’ boring white men with grievances.

Now a Netflix executive, Ted Sarandos, is trying to rationalize hosting an ugly anti-trans comedian by claiming it’s all about “diversity”. I got news for you, Ted: diversity does not mean you should encourage hatred and ignorance. We don’t need stupid to counterbalance intelligence, and we don’t need to slather shit on a tasty sandwich to make it better. I don’t need to “teach the controversy” in the classroom and educate students about evolution by promoting creationist propaganda.

And then he cites Hannah Gadsby as an example of their rainbow of lovely entertainment choices. Gadsby has a few words for that. 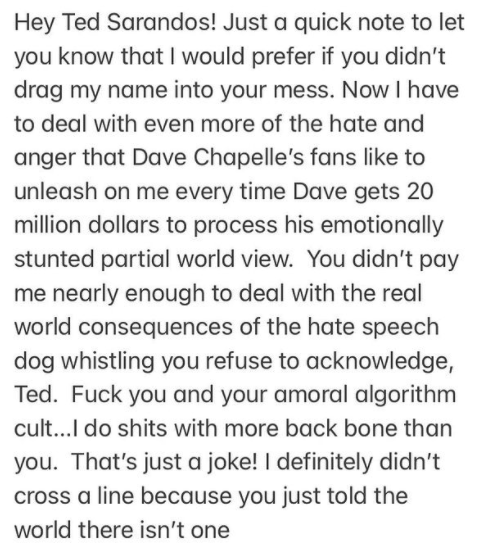 Hey Ted Sarandos! Just a quick note to let you know that I would prefer if you didn’t drag my name into your mess. Now I have to deal with even more of the hate and anger that Dave Chapelle’s fans like to unleash on me every time Dave gets 20 million dollars to process his emotionally stunted partial world view. You didn’t pay me nearly enough to deal with the real world consequences of the hate speech dog whistling you refuse to acknowledge, Ted. Fuck you and your amoral algorithm cult…I do shits with more back bone than you. That’s just a joke! I definitely didn’t cross a line because you just told the world there isn’t one.

Sadly, Chappelle (and Louis CK) will only experience fleeting interruptions in their careers. They’ll bounce right back — in Chappelle’s case, there doesn’t seem to have been any significant pushback at all — and will see their fans rushing into the warm embrace of comfortable bigotry again.