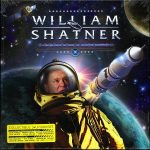 I dreamt that William Shatner was going to be launched into space, which was odd since I really don’t care about an over-the-hill celebrity and I generally don’t have that kind of random dream. But then this morning I learned that it was really going to happen next week! This was not a prophetic dream, I must have just fleetingly encountered a news item last week that just sunk out of my awareness (I really, truly don’t give a fuck about Shatner) and then resurfaced while I was asleep.

Science fiction will soon become reality, as William Shatner is scheduled to launch on the next crewed spaceflight of Jeff Bezos’ Blue Origin.

The company plans to fly the Canadian actor, who famously played Capt. Kirk in the original “Star Trek” television series, as one of the passengers on the company’s New Shepard rocket.

The launch is planned for Oct. 12. Blue Origin’s vice president of mission and flight operations, Audrey Powers, is joining the flight, with the crew of four rounded out by previously announced members Planet Labs co-founder Chris Boshuizen and Medidata co-founder Glen de Vries.

But wait! This is insane! Shatner has no qualifications for this mission, and he’s 90 years old! It’s pure PR. Bezos is just stuffing random attention-getting bodies (and a few of his corporate cronies) into his rocketship to sit quietly and do nothing. This is precisely what the phrase “spam in a can” means.

Also, Bezos has sold $100 million in tickets to willing hunks of wealthy spam. None of them earned the privilege of going into space, they’ve just got connections and money that’s going to give them bragging rights at the next cocktail party. Just lumps of spiced ham, heavily processed, shot into space, and unfortunately returned.

You know what this means? Elon Musk is going to have to bag a Kardashian, or maybe a Star Wars cast member, for his next flight.

By the way, did you know that Bezos is suing NASA for awarding a contract to Musk? Fight, fight, fight! Can they please kill each other, or at least cripple themselves, in a bloody time-wasting spectacle of profligate money-flinging?

The ignominy » « Why is it always the progressives framed as the problem?