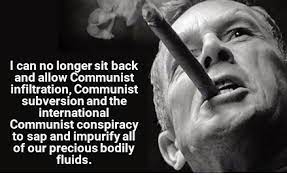 Last night, I was listening to Katy Montgomerie’s latest TERF Wars video while I was supposedly puttering away at a lecture — it’s a nice entertaining mix of laughter and righteous anger — when she mentioned a name I hadn’t heard in a while, Andy Lewis. I banned him for his obnoxious TERFy bullshit way, way back in 2018, and I got a lot of cluck-clucking and tut-tutting from the British sceptic community for it. He’s such a rational fellow, don’t you know. Such an important figure in UK scepticism. He is still ranting away about Adult Human Females now in 2021, I guess, so I took a peek at his blog. He wrote about me just last year! Not just me, though, the main target of his ire was Rebecca Watson, who is still punching all the right buttons.

He was mad because she was using slurs and pointing out that the XX/XY dichotomy is “middle school science” and largely irrelevant in any discussion about human rights. He wants to discuss the True Science, which reveals that there are only males and females, and chortles dismissively at the idea that he and his fellow TERFs would use the XX/XY distinction.

The claim is that this is ‘middle school science’ and that if ‘the fervent believers’ are challenged they ‘will throw their hands in the air, claim it’s too complicated or the data is lying or whatever other excuse they can think of, and continue believing what they believe. And in a statement that we shall come back to, “They came to their belief first, for other reasons, and then attempted to build up science and reason in a way that makes it look like it supports their belief.”

In the XX/XY system found in humans, the actual determination mechanism is the SRY gene that is usually, but not always found on the Y chromosome. This gene switches between one of two evolved developmental pathways.

Almost, but not quite. He’s trying to reduce it even further, from a whole chromosome to just a single region on that one chromosome. If only he thought a little deeper about that phrase, “developmental pathways”, because that’s what really matters from a biological perspective — there’s a whole long chain of events that are usually, but not always, in concordance, and there’s a fair bit of wobble in the outcome. It’s not binary at all — as soon as you start dealing with multigenic processes, you open the door to a whole lot of variation.

(By the way, birds aren’t quite so binary, either. Gynandromorphs, anyone? Avian homosexuality? Birds don’t play by your rules, man.)

If not chromosomes, then what is the binary defining character? He plops down in favor of gametes.

Sex is not defined by these chromosomes. Sex arises from the fact that we are evolved sexually reproducing organisms. Sex evolved deep in life’s history and has remained remarkably conserved – although there are many *sex determination mechanisms* in organisms. [Yes? He keeps almost getting it — sex determination in different species is fluid!]

Sex is near universal in eukaryotes and is the ‘the mixing of genomes via meiosis and fusion of gametes’. In multicellular organisms it is almost always done through the joining of unequal size gametes (anisogamy).

It is this fundamental and ancient asymmetry in gametes and the joining together of one of each type that gives rise to the sexes. The small, mobile gamete we class as male and the larger, and immobile one we class as female.

In multicellular organisms like us where anisogamy rules, the *sex determining mechanism* (the SRY gene) is used to switch between two sets of genes that develop different phenotypes to support each gamete type – males and females.

To suggest that there are more than two sexes, or even more extreme, that somehow sex forms a continuum, a distribution or a spectrum is completely incompatible with this view of life and sexual reproduction. (The idea that ‘sex is a spectrum’ is a core part of the credo of gender ideology.)

As usual, he misses the point. He is correct that there are two functional classes of gametes in humans. Generally speaking, an individual can only form one or the other, or none at all. But so what? Am I going to have to provide a semen sample before I’m allowed to use a public restroom? From a policy and social interaction perspective, this is a non-starter.

But most importantly, people are not gametes. Every person is the product of a fusion of two haploid gametes, one large immobile one and one small mobile one, so we start as a mixture of both. We then go through a complex developmental process with many steps that produce the messy diverse multicellular organism that may try to practice mating behavior of one sort or another, or contribute to the upbringing of more messy diploid multicellular organisms, or tries to shape the culture that we use to propagate ourselves. I, for one, do not consider myself a lumbering sperm delivery system, nor do I consider my wife an ambulatory incubator/ovum generator. I am also rather offended that a dilettante with only a superficial knowledge of evolution would think that evolutionary biology can be used to justify such an absurdly reductionist view of humanity.

Yes, I have gonads that produce sperm. It is categorically wrong to think that somehow tells you anything more about my nature, my sexual preferences, or whether I should be allowed to wear a skirt or not.

We see defenders of evolution such as @pzmyers reacting like the worst frothing mouth evangelical preacher when asked to defend the idea that women can have penises.

One would have thought that Myers would have taken the opportunity to use this as a quirky way to explain how evolution works and ends up with counterintuitive results. But no. Shouting and screaming instead.

I can only assume that Mr Lewis trusts that none of his readers will ever follow a link he gives, because there is no frothing mouth evangelical preacher or Shouting and screaming at that link. Go ahead, check.

There does seem to be a lot of shouting from TERFs over pragmatically useless distinctions between human individuals. I just don’t need to know about chromosomes or reproductive apparatuses in the people I interact with. As I said back then,

The presence or absence of a penis is possibly the worst gender signal ever, because we keep those hidden in almost all of our social interactions. I’d have to be really close, very intimate friends with a woman before she’d show me her penis.

I’d have to be even more intimate with her before I’d ask her to ejaculate for me.

And @oracknows screaming ‘TERF’ because I suggested the biggest sceptical issue that should be covered right now is the denial of the material reality of sex among gender ideologists. (now appears to be deleted.)

Tell me, has it ever been accurate to say David Gorski was screaming? It’d be fair to say I sometimes get worked up and rage loudly at the universe, but David is always careful and objective. I also can’t quite imagine him (or me, for that matter), denying the material reality of sex. Sex is most definitely real. It’s just not the simple phenomenon that Lewis thinks it is.