The current crop of New Atheists take a brutal beating. Phil Torres takes the approach of looking at the atheists who get all the attention today, and asking whether they were actually good moral people who represented the ideals of atheism well.

So if you want to read about how the atheists who rode the glory train of the atheist resurgence 10 or 15 years ago to fame and fortune now are doing, check it out and be depressed. The faces of the New Atheism are Sam Harris, Michael Shermer, Lawrence Krauss, Richard Dawkins, James Lindsay, Peter Boghossian, David Silverman, and Steven Pinker, and if just that list is harrowing enough, wait until you read the dissections. To make it even worse, they’re all converging on the Intellectual Dark Web, which ought to be renamed the New Fascism.

What’s sad is that the New Atheist movement could have made a difference — a positive difference — in the world. Instead, it gradually merged with factions of the alt-right to become what former New York Times contributing editor Bari Weiss calls the “Intellectual Dark Web” (IDW), a motley crew of pseudo-intellectuals whose luminaries include Jordan Peterson, Eric and Bret Weinstein, Douglas Murray, Dave Rubin and Ben Shapiro, in addition to those mentioned above. 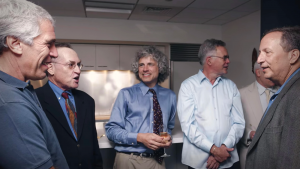 Flash this image to see how fast a ‘free speech warrior’ will block you.

At the heart of this merger was the creation of a new religious movement of sorts centered around the felt loss of power among white men due to the empowerment of other people. When it was once acceptable, according to cultural norms, for men to sexually harass women with impunity, or make harmful racist and sexist comments without worrying about losing a speaking opportunity, being held accountable can feel like an injustice, even though the exact opposite is the case. Pinker, Shermer and some of the others like to preach about “moral progress,” but in fighting social justice under the misleading banner of “free speech,” they not only embolden fascists but impede further moral progress for the marginalized.

When I think back to that period when we were all giddy with the possibilities of a strong atheist movement, there are many other names that come to mind of eloquent, activist atheists who got left behind by that glory train — people who I thought were fantastic representatives of a progressive atheism. Think about Greta Christina, Mandisa Thomas, Jey McCreight, Lauren Lane, Rebecca Watson, Monette Richards, Sikivu Hutchinson, Annie Laurie Gaylor, and a few hundred others who should now be the names and faces we see on CNN whenever they go looking for a representative atheist perspective. They’re still around, but not getting the attention they deserve. Instead, Richard Dawkins is still the figurehead of atheism, with those other guys getting an occasional nod. I wonder why? Are the people on my list missing something? Or is it just their estrogen vibe?

Think back just a decade, and what happened to atheism? A massive anti-feminist backlash that hounded so many good people out of the movement and left the assholes in charge. We still feel the repercussions.

At least some studies have shown that, to quote Phil Zuckerman, secular people are “markedly less nationalistic, less prejudiced, less anti-Semitic, less racist, less dogmatic, less ethnocentric, less close-minded, and less authoritarian” than religious people. It’s a real shame that New Atheism, now swallowed up by the IDW and the far right, turned out to be just as prejudiced, racist, dogmatic, ethnocentric, closed-minded and authoritarian as many of the religious groups they initially deplored.

Oh, what could have been…

Stop it. It wasn’t a lab leak » « Shh, don’t tell my colleagues. Especially not the arachnophobic ones