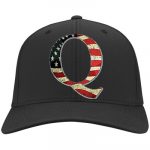 One of the things bringing me great joy right now is watching QAnon implode. None of the predictions came true! It was all a lie! It’s sinking in for some.

Despite attempts to keep the hope alive, QAnon followers watched in dismay as Trump left Washington, D.C., for Florida Wednesday morning while Joe Biden was sworn in as the 46th president of the United States. With no military coup, no dramatic scenes of revolution, and no mass executions or retaliatory violence as prophesized, QAnon adherents began to wonder if they had been deceived.

“It’s over. We were played,” one follower said on a QAnon Telegram channel with more than 30,000 subscribers. “I’m going to throw up now.”

“[Q] has left me here looking out over the sea watching and waiting,” a QAnon disciple said on Telegram. “No word, no letter, no sign. Nothing tangible on which I can depend. I could wait forever but no true sign.”

“I’m crying and tired of this pain,” said one post on a QAnon channel. “All the evil is being praised right now while we sit and watch. No arrests, no swamp reveal. Nothing.”

With Biden officially inaugurated, one QAnon follower was clearly disgruntled. ​“We all got arse fucked,” ​he told the channel.

It’s great that I can laugh now, but these people haven’t changed. Give them time, and that gullibility and loony conspiracy thinking will have to bust out somewhere else. That’s already happening, and this is ominous:

Some QAnon channels attempted to maintain optimism by theorizing that “Biden will be the one who pulls the trigger” that leads to “The Storm”, that “Biden is Q,” and even that the 17 flags at Trump’s farewell speech—Q is the 17th letter in the alphabet—was a sign to “trust the plan.”

No, no, no — you’re supposed to have learned to be more skeptical, not to reach harder for goofy rationalizations.

Do you like to play games? » « The Pelagian Heresy? Really?