Today I had to take the car in to get new tires. We’re a rural bit of the country, but that doesn’t mean we’re all green and soil and fresh sprouts — this was a tire store next to the railroad tracks with a line of grain elevators across the street. I wasn’t about to hang around in the waiting room, so I went prowling about the industrial wasteland next door.
What did I find? Cryptic machinery, corrugated sheet metal buildings, and iron rails, of course. With spiders! 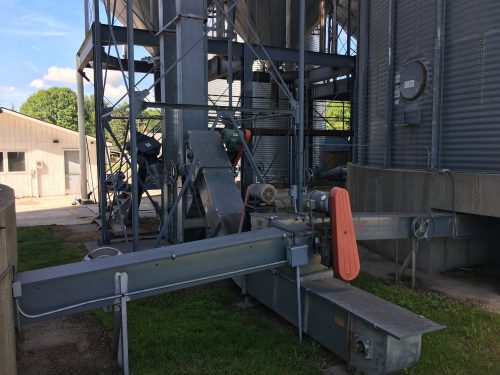 Everything was covered with spider webs. Everything. Even those shiny rails where trains come through a couple of times a day — I guess someone was optimistic about who they could snare.
Most of the inhabitants were in hiding, since it was about noon and spiders are sensible about not being exposed in the heat of the day, but I did track down a few.

There were many sheet and funnel webs everywhere. I could see the nice silken tunnels they’d left for themselves, but whenever I got close to them, the shy spiders would dart to safety.

By getting really close and peering down the tunnel, I could just make out the inhabitants: grass spiders. Grass spiders are really common, but conditions were not optimal for getting a good photo. It was all legs.

I did find a few familiar friends, though. That little spider posing by a big grey gear at the top of the post? That was Steatoda borealis. I got her to pose for a bit on my pinkie, just so I could confirm her species. She’s small but plump.

S. borealis was probably the most common spider out there, after the grass spiders. I was finding them everywhere.

They must have an affinity for industrial sites that are mostly free of pesky humans.
On the other hand, back at the tire shop warehouse, which is heavily frequented by people, I did find Parasteatoda. Here’s a mama with two egg sacs. The one on the right is rumpled and old, and has probably already hatched out. The one on the left is new, and I briefly considered stealing it until I realized how many spider babies I already have in the lab.

Then, a bonus! On the way home I had to stop to fill up a red gas can to fuel up the hated lawn mower, and what do I see? A nice little Parasteatoda male dancing about on the can.

I want you to know this wasn’t an easy photo to take. I’d filled up the can and had picked it up when I noticed the spider, so I had to hold the full can still with one hand, while I reached into the car with my other hand to get the camera, turn it and the flash on, adjust the zoom, and bring it to my eye. I probably looked a little strange trying to juggle a heavy gas can and operate a camera one handed to take a photo of a bit of gunk. I’m amazed that I succeeded.

The Lincoln Project is not your friend » « I wonder which of the fervent Republicans at the rally infected him?