This is just a brief update on my summer research. I’ve mentioned before that I’m more of a bench scientist kind of guy, but that’s changing to some degree. Part of it is this COVID-19 pandemic, which is limiting lab access and forcing me to spend more time in alternate activities. A larger part is that last year I switched from zebrafish work, which was entirely an indoor activity with an inbred species, to looking at spiders, which are immensely diverse and more complicated – they don’t all live in nice air-conditioned buildings.

So last year I’d also begun a project where I surveyed spider populations in people’s garages and sheds – it was convenient for a newbie arachnologist, because it narrowed the environments and limited the number of different species I had to identify. But that project is also on hold this year, because knocking on people’s doors and asking them to let you survey their living spaces is a bad idea during a pandemic. Instead, I saw this as an opportunity to spread my wings and get familiar with more spiders and more environments, and an excuse to move out of garages and out into the wide world.

Yeah, I moved all the way from a lab to a garage…baby steps, you know. This summer I decided to go off and challenge myself with more complex spaces. This involves going to places that aren’t full of houses, that aren’t occupied by lots of people, and that may involve walking off into the brush and finding inconvenient spots with relatively undisturbed habitat.

One of the tools I’ve started using is a drone to scout out locations. I’m lazy; if I see some tantalizing bit of habitat well off the road in the distance, it’s nice to be able to send a drone out to see how navigable the path looks and whether it looks as interesting closeup as it does from a kilometer away, without having to actually walk there. 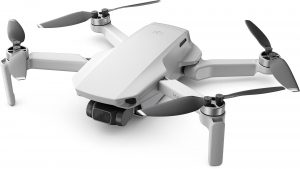 I’m using a Mavic Mini, which is wonderfully easy and convenient. It’s tiny, so I can actually stuff it in my camera bag and carry it with me, and it’s easy to fly so the basic things I want to do with it aren’t an obstacle. It’s fun to fly, but I didn’t want to get sucked into a vortex of struggling to learn how to use it. Lazy, remember? If this gadget were complex, at some point I’d decide it was easier to just leg it through the brush.

Not a problem. This thing is so easy that any idiot can use it to make a quick scan of a kilometer of ground.

What am I looking for? What am I not looking for is an easier question. I’m avoiding agricultural areas, which scratches off 90+% of the terrain around here, and I’m shunning, mostly, parks that have been groomed and are full of people, and although we have a lot of lakes, the larger ones tend to be surrounded with lake cabins and are privately owned. I want something abandoned or as near to wild Minnesota as I can get, but I also want it accessible (but not too accessible). I’ve been going over maps, and found a few promising places.

There are several state wildlife management areas near me. These are patches of land set aside for non-agricultural use – the intent is that they are a kind of reserve where local wildlife can thrive undisturbed. The primary motivation seems to be to shelter ducks and deer for a while, so they can be shot later, but at least no one is intentionally culling the local spiders. So yesterday we took a spin and visited a few of them.

The first spot we visited was perfect. This was the Dolven State Wildlife Management Area, and it spoiled me. I didn’t need the drone at all; there was a nicely groomed parking area with a bench, and right across the road was a beautiful messy environment, perfect for spiders. I buzzed the place anyway. This location was in a loop of the Pomme de Terre river, there was a bit of wetland enclosed in the river and another stretch of woods right next door. No hiking required!

A river, grassy patches, and a cluttered wood right there, so I could just plunk myself down in one spot and have a grand time puzzling out the spider population. It’s also only 6 minutes from my house. Very convenient!

The second spot…less convenient. Only a little further, a whole 9 minutes away, but the Klason State Wildlife Management Area was less diverse and less accessible. There’s a deeply rutted unmaintained road that parallels it, complete with spots that were mud wallows and that we weren’t going to even try to cross in our little Honda Fit. 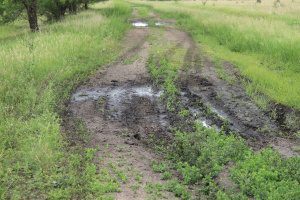 A quick survey with the drone revealed that there was little point in exploring deeper, since it was the same flat scrubby grassland all along its length, and we could just pick any point we could reach and sample it there.

The third place we checked out was lovely. It’s the office of our local Wetland Management District, which has a driving path and footpaths. While it has groomed paths and gets a little tourist traffic (this is Morris, so not a lot of that), it is a wildlife refuge with prairie grasslands, marshes, ponds, and wooded areas, and it sprawls out over a lot of area. The drone was useful here for checking out some sites that were off the trails, and that have some real potential for being places where spiders lurk, although, truth be told, spiders lurk everywhere.

What’s next? There are a few more places I want to survey, mainly some local spots that are neglected and full of regrowth, and I’d also like to toss an abandoned farm with decaying buildings into the mix – spiders love a good ol’ abandoned barn. Then it’s time for the hard work, plunking myself down for a few hours in the early morning or late evening, using a sweep net, gathering spider samples and then sitting down and staring at taxonomic keys trying to figure out who they are.

Also, I’ve got a few vats of permethrin and picaridin on order. Part of the joy of getting out of the lab and into the field is discovering how much ticks love us. We were plucking them off us all evening yesterday, and even now I’ve got the creepy crawlies as I imagine more of the ugly cousins of the arachnids I like crawling over me.