A reader informed me that I was mentioned in a British magazine, and sent me a scan of the relevant bit. It’s not so much my brief mention that interested me, as that it’s another example of the Panspermia Mafia in action. It’s an article about a recently elected Conservative MP, Jamie Wallis, who has a science degree…or does he? 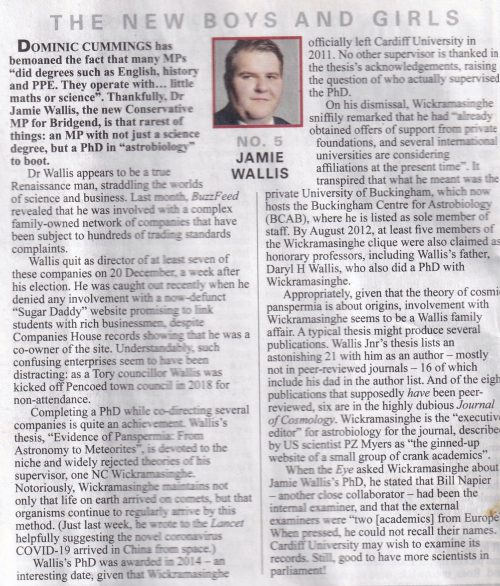 Dominic Cummings has bemoaned the fact that many MPs “did degrees such as English, history, and PPE. They operate with…little maths or science.” Thankfully, Dr Jamie Wallis, the new Conservative MP for Bridgend, is that rarest of things: an MP with not just a science degree, but a PhD in “astrobiology” to boot.

Where it gets interesting is that he obtained a PhD from, I presume, Cardiff University, which was NC Wickramasinghe’s former affiliation, although he has since ensconced himself at the Buckingham Centre for Astrobiology. There is reason to doubt that Wallis actually did the caliber of work we expect in a PhD thesis.

Completing a PhD while co-directing several companies is quite an achievement. Wallis’s thesis, “Evidence of Panspermia: From Astronomy to Meteorites”, is devoted to the niche and widely rejected theories of his supervisor, one NC Wickramasinghe. Notoriously, Wickramasinghe maintains not only that life on earth arrived on comets, but that organisms continue to regularly arrive by this method. (Just last week, he wrote to the Lancet helpfully suggesting the novel coronavirus COVID-19 arrived in China from space.)

Why does the Lancet, or any respectable journal, continue to publish crank letters from Wickramasinghe? But OK, I think it’s established that Wallis’s degree was somehow earned under the supervision of a well-known fringe kook, and that it’s questionable how much work he actually invested in the project, which sounds like some kind of review involving no independent research.

But why do I call this the Panspermia Mafia? They use their connections to promote a small family of fellow travelers.

Appropriately, given that the theory of cosmic panspermia is about origins, involvement with Wickramasinghe seems to be a Wallis family affair. A typical thesis might produce several publications. Wallis Jnr’s thesis lists an astonishing 21 with him as an author — mostly not in peer-reviewed journals — 16 of which include his dad in the author list. And of the eight publications that supposedly have been peer-reviewed, six are in the highly dubious Journal of Cosmology. Wickramasinghe is the “executive editor” for astrobiology for the journal, described by US scientist PZ Myers as the “ginned-up website of a small group of crank academics”.

Yeah, that’s about it — it’s so inbred that it relies on the one guy who has a name and connections but very little credibility, Wickramasinghe, to promote the members of his cabal in a roster of fake journals. This article didn’t examine them in detail, but I suspect that all 21 of the articles are rehashed, recycled, barely rewritten examples of frantic self-plagiarism. To say you got a degree with Wickramasinghe is the British equivalent of saying you’re a colleague of Kent Hovind.

Isn’t it nice that he provides a pipeline for Conservatives to claim they have the authority of science? Just in case you’re wondering, no, they don’t.