Oh, boy, Easter is this weekend! Aren’t you all excited and looking forward to it? When I was a kid, it was all chocolate bunnies and easter eggs, and we didn’t even think about the religious side of it. I think we might have gone to church services a few times, but that wasn’t something to be happy about, it was kind of a drag.

Now, though, I’m dreading it. A lot of Christians think Easter is a great excuse, even an obligation, to gather together in large groups and infect each other. I think we might even be able to predict a blip in the COVID-19 statistics 2-3 weeks after this weekend. God won’t save you because your purpose is pious, and he certainly won’t save me if you spew more viral particles around in the grocery store to infect me. Stay home. Go into your little closet and pray alone. Please.

We already know that a significant number of COVID-19 cases in South Korea can be traced directly to the Shincheonji cult, and their stealthy habits of congregating to infect each other, and then infiltrating other churches to recruit new members. 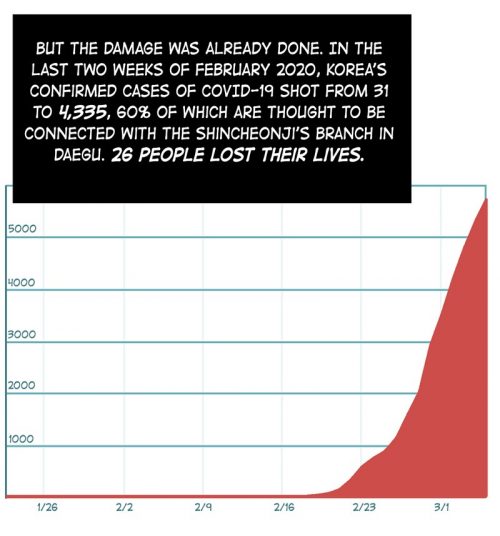 South Korea has been remarkably effective and efficient in controlling the disease, it’s sad that their efforts were being undermined by religious fanatics (Daegu, by the way, is where my daughter-in-law is from. Lovely city.)

What’s even sadder, though, are the gormless missionaries who are taking advantage of the idiot president of Brazil’s policies to actively seek out remote indigenous people and kill them with disease. In a time of pandemic, we’re all told to stay-in-place to inhibit transmission of the virus, which makes sense, but these clueless twits are doing the opposite, and charging off to assault uncontacted native tribes with the Lord’s Plague, and also the Lord’s useless Holy Book.

Just like Trump, Bolsonaro has appointed many such fundamentalists to important positions in his government. These appointments include placing evangelical former missionary Ricardo Lopes Dias at the head of the National Indigenous Foundation (FUNAI), Brazil’s governmental agency charged with overseeing the interests of Indigenous populations. In an attempt to quell controversy over his appointment, Dias has said, “I don’t see this as a mission or an opportunity to find new converts.” And yet American missionaries smell an opportunity.

Representatives of the missionary organization Ethnos360, until recently known as New Tribes Mission, “arrived in the Deni Indigenous Territory in Acre state in late February” and acquired a helicopter for the purpose of making contact with uncontacted tribes, according to reporting by Sue Branford for Yes! Magazine. Headed by Larry M. Brown and a member of the Forum of Bible Agencies International (along with better known organizations like the Jesus Film Project and Wycliffe Global Alliance), Ethnos360 focuses on converting “unreached groups.” It also happens to be precisely the organization with which Dias was an active missionary from 1997-2007.

They’re doing more than flouting common sense and reason, they are breaking the law while Bolsonaro looks the other way.

To be sure, Ethnos360’s drive to reach uncontacted peoples contravenes standing FUNAI policy. It’s also certainly a violation of international law, and it arguably falls afoul of the 1988 Brazilian Constitution itself. Unfortunately, it seems unlikely that Dias will move against his former organization. And as for Bolsonaro, he once casually remarked, with truly stunning bigotry, “It’s a shame that the Brazilian cavalry wasn’t as efficient as the Americans, who exterminated their Indians.” He may well allow uncontacted groups to be wiped out by missionary zealots.

Sometimes I think the real plague isn’t a physical virus or bacterium, it’s the mind virus of religion that leads people to do real harm with a smug smile on their face and a hymn in their hearts.

You see, Roosevelt could have been a greater president » « Didier Raoult, pretentious git