David Silverman: hired by the Conru Foundation, fired…well, I guess we’ll have to wait and see. 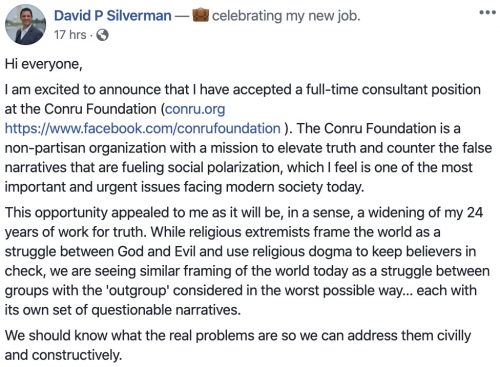 Although I think his fans are predicting his future. They know what’s coming.

One has to wonder, though — what the heck is the Conru Foundation?

The Conru Foundation is a nonpartisan think tank focusing on elevating truth and undermining the false narratives that cause needless polarization and threaten modernity.

We seek to reclaim “Social Justice” by producing educational material and events that promote cognitive liberty, freedom of speech and Enlightenment values, as well as directly supporting speakers of truth.

Oh. They’re going to reclaim social justice by promoting Free Speech. This sounds familiar. This is the same rationale we always get from the right-wingers: Free Speech Uber Alles. We can sacrifice all kinds of civil rights as long as we retain the freedom to talk about them.

I still had never heard of them. I looked a little deeper; here’s the bio of the founder, Andrew Conru, who built this foundation with grit and determination and hard work and the highest aspirations.

I was fortunate to be at the right place and time (e.g., Stanford in 1992) when the Internet just started. This gave the opportunity to be the one of first to create interesting things like online shopping carts, centralized ad banner management, online matchmaking, and real-time website customization technologies. Over the years, I started a dozen or so companies with the largest being the Friend Finder Network – a dating social network with over 300M registered members. I also realize that most internet technology is pretty straight forward and success happens often not only by having the right skills but with a bit of luck and timing.

“Online shopping carts”? “centralized ad banner management”? I hate him already. This is another of those capitalists who poisoned the promise of the internet by turning it into yet another vehicle for sucking money out of people’s pockets. The Conru Foundation was only recently founded in 2017, and is just another “think tank” to defend his right to exploit others.

Adult FriendFinder has been accused of committing systematic billing fraud. According to the complaints filed, the company has a practice of continuing to bill customers even after they have cancelled their service. Former employees of the company have claimed that this is their standard policy and not the result of errors. These employees have stated that the majority of customers do not notice the charges for many months. As of October 2014, hundreds of civil cases have been filed against the company and a criminal indictment was made by the Federal Trade Commission against the company. In 2007, Adult FriendFinder settled with the Federal Trade Commission over allegations that the company had used malware to generate explicit pop-up ads for the service on computers without user consent.

Love doesn’t always win in the end, as it turns out » « Beauty contest!