Behold, a discarded lump of chewed birch pitch from Denmark: 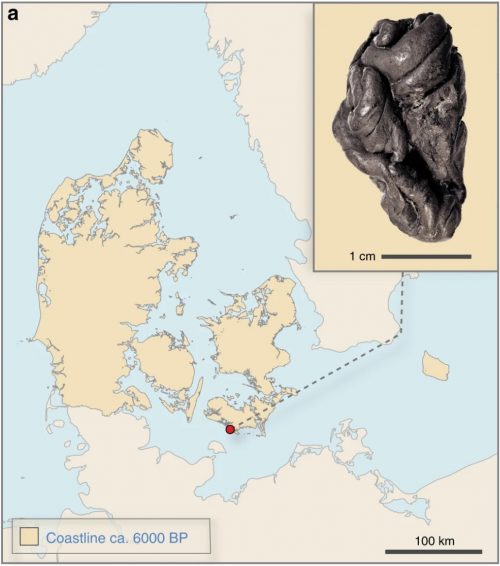 Awesome, I know. Heating up birch bark produces this dark, sticky substance that can be used as an adhesive, and also can be chewed like chewing gum. It apparently has some antiseptic properties. No one has told me yet what it tastes like, I guess I’ll have to try it for myself sometime.

That lump was thrown away 5700 years ago, after someone had been chewing on it for a while. What’s cool is that lots of DNA was extracted from it, and we know a bit about the person who’d been using it.

We successfully extracted and sequenced ancient DNA from a 5700-year-old piece of chewed birch pitch from southern Denmark. In addition to a complete ancient human genome (2.3×) and mitogenome (91×), we recovered plant and animal DNA, as well as microbial DNA from several oral taxa. Analysis of the human reads revealed that the individual whose genome we recovered was female and that she likely had dark skin, dark brown hair and blue eyes. This combination of physical traits has been previously noted in other European hunter-gatherers, suggesting that this phenotype was widespread in Mesolithic Europe and that the adaptive spread of light skin pigmentation in European populations only occurred later in prehistory. We also find that she had the alleles associated with lactase non-persistence, which fits with the notion that lactase persistence in adults only evolved fairly recently in Europe, after the introduction of dairy farming with the Neolithic revolution.

We also know that she had duck for dinner and had been snacking on hazelnuts. She carried the Epstein-Barr virus, so she’d probably had mononucleosis at some time in her life. She probably wasn’t a farmer, but was a member of a known hunter-gatherer population in central Europe, which fits with her diet of wild game and foraged nuts. Her descendants would eventually migrate north to colonize central Scandinavia, and intermingle with other hunter-gatherers migrating from the east. 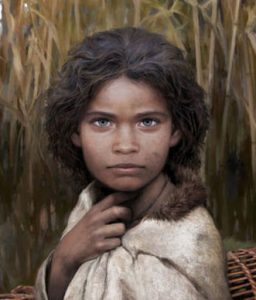 Oddly, most of the popular press reports I’m seeing on this story call the gum-chewer a girl. I don’t know why, maybe it’s based on this reconstruction, but I don’t see any evidence in the paper to characterize her age — she could have been the Svyltholm Old Lady, for all we know.

I don’t chew gum, but maybe I should start, just to leave some trace of me to be found in 7000 AD. Now I just have to figure out where to leave my wads of gum to maximize their odds of being found…

Why hasn’t Rush Limbaugh collapsed into deflated pile of canvas & sticks? » « But I don’t want to go play in the snow!