I just bumped into this 2 year old article in Forbes. Forbes is all sober, serious, conservative bullshit, right? This piece isn’t sober at all. It’s about post-apocalyptic visions of the future and how billionaires are buying up vast tracts of land far away from the coast because they know what’s going to happen. Normally, I wouldn’t put it past billionaires to pull off all kinds of perfidious schemes, but in this case, I suspect it’s more that lots of acreage is available and cheap far inland, rather than that they’re preparing for doomsday.

You just have to look at the sources.

In the early 1980’s, spiritual visionaries and futurists provided clues to our changing planet. Often dismissed as crazy prophets, their thoughts for a new world were quickly ignored and laughed at. Gordon-Michael Scallion was a futurist, teacher of consciousness studies and metaphysics and a spiritual visionary. In the 80’s he claims to have had a spiritual awakening that helped him create very detailed maps of future world, all stemming from a cataclysmic pole shift. The result, while not based on any science, nonetheless provides a vivid and compelling picture of an Earth ravaged by flooding.

My emphasis. Note also that Gordon-Michael Scallion was a co-host on Coast to Coast AM, that pioneering talk radio show that let the conservative world know you could get away with saying anything you wanted on radio.

So, in the event of a post asteroid apocalypse, where are the safest territories in the world? According to several prognosticators and much criticized theorists, here is the detailed list of predicted land changes based on geological positioning. All post polar shift predictions are based on theories from Gordon-Michael Scallion, Edgar Cayce and others, and should not be construed as fact.

I haven’t heard the name of Edgar Cayce invoked seriously in decades. I wonder if people have forgotten who he was? He was called the “sleeping prophet”, because he’d do clairvoyant readings while pretending to be asleep, and made all kinds of goofy predictions and claims of past history (he was big on Atlantis stories and reincarnation). But that’s enough to tell you about the quality of the pile of maps which are published. In Forbes. With an author admitting that they’re not science-based. 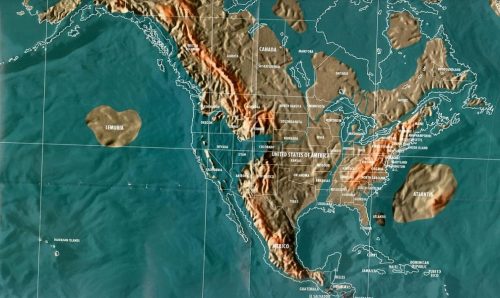 Gosh. I’m going to have to buy me some ocean-front property in Nebraska while it’s cheap. I am a bit baffled about how so much of Florida remains above the waves while a big chunk of Colorado is flooded, though. And if you’re going to include Atlantis and Lemuria, you ought to also mark the location of R’lyeh.

You heard the man, up your game » « In case you ever doubted that Uber was evil