Easy. They’re in my house.

It’s been consistently cool out here in Minnesota — temperatures have been right around 0°C, we’ve had a little light rain, a little snow. It’s not a happy time for spiders outdoors, and not at all good for their prey. The mosquitos are mostly dead! I see an occasional fly, but mostly the local arthropods are busy diapausing or retired to refugia or migrating away, while some are in their larval stages hiding away in lakes and streams. It’s not easy being a spider right now.

Mary of the piercing eyes spotted these little ones spinning away in out of the way places in our kitchen, though. They’re tiny, little more than dots, but they’d put up barely visible webs under a windowsill, possibly hoping to catch the rare fruit fly from the produce we keep on the counter. I had to zoom in with my camera lens to recognize them, and yes, they’re Parasteatoda. 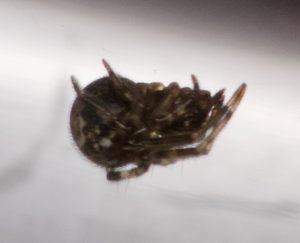 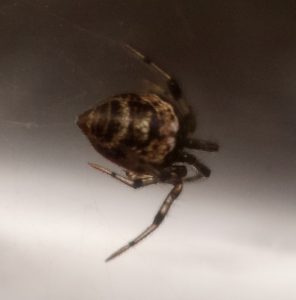 They’re lucky, now they get to go into my lab where they’ll get a more reliable diet.

P.S. They’re not all in my house. There are some hanging out in your house, too.

I am giving an exam today » « Phillip Johnson is dead