For all you masochists out there who want all the details, Stephanie Zvan has published a thorough timeline of David Silverman’s firing.

I want to bring up one thing that bothers me deeply, but doesn’t get emphasized much. Silverman’s actions, even if they were consensual (and I don’t believe they were) lacked consent from one other significant person: Silverman’s wife. I don’t even know her name, but her long relationship with this man was cruelly wrecked by his actions, and that’s a betrayal that strongly affects my feelings about the guy. It was a rotten thing to do, and he did it repeatedly. Even if he were magically reprieved of everything else (again, not that I think he can be), it means that personally I would never be able to trust him again. How you treat your partners in the deepest relationships in your life matters.

Likewise, Richard Carrier cheated on his wife, another nameless person who is left out of the narrative.

I have no problems with the diverse forms of relationships human beings can have; open marriages, polyamorous relationships, no sexual relationship at all, whatever. It’s all good when all participants have mutually agreed to the terms. People who unilaterally break those terms and harm the people who trusted them…those are actions of deep shame and require greater amends than this casual dismissal of an event that broke apart families and caused lasting hurt. Yet now those women are discarded and ignored.

So no, those men can never be my real friends, and I hope for the best for those ignored women.

He seems unperturbed by his own actions. 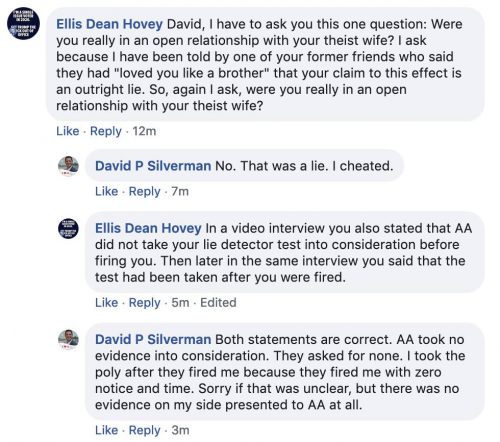 Long day, with a reward for me! » « What does it take to get a victim believed?