It comes from Philip Senter, in a book reviewed by Darren Naish.

The early chapters of this book evaluate and discuss the creationist contention in general and the relatively young history of the entire movement. The impact of John Whitcomb and Henry Morris’s 1961 book The Genesis Flood is obvious, as is the fact that their arguments fail evaluation (Senter 2019). Nevertheless, their influence was such that – from the early 1970s onwards – a number of like-minded individuals were promoting Whitcomb and Morris’s vision, and were in particular arguing that ancient and medieval writings and works of art make explicit reference to dinosaurs and other long-extinct animals. Senter (2019) uses the term apnotheriopia (meaning ‘dead beast vision’) to describe the tendency of creationist author to interpret monsters in literature and art as long-extinct reptiles.

If apnotheriopia is one of your guiding principles, it ‘follows’ that the fire-breathing dragons canonical to Eurocentric, Christian mythology should be interpreted as dinosaurs or similar reptiles, and that such creatures were dragonesque fire-breathers. So integral has the whole fire-breathing thing been to these authors that they’ve proposed fire-breathing for dinosaurs of several sorts (most frequently hadrosaurs) as well as for pterosaurs and the giant Cretaceous crocodyliform Sarcosuchus (Senter 2019). You might know of one or two cases in which this idea has been mooted. Senter’s book shows that numerous authors have engaged with this vision and written about it. The sheer quantity of this literature is daunting – I was going to say ‘impressive’ but this absolutely seems like the wrong word – and Senter has clearly gone to some considerable trouble to obtain it. He must own a pretty hefty personal library of creationist volumes, and I’m reminded of a statement he makes in one of his papers, wherein he notes that collecting and reading creationist literature on dinosaurs and other extinct animals is one of his “guilty pleasures”.

It’s as ridiculous as it sounds, and it is promoted by the inexplicably popular version of creationism favored by Ken Ham and Kent Hovind. If it’s written down in an old text, the older the better, it must be true, because no one in the past had imagination or creativity, or was ever mistaken in an observation, and they must have been literally describing something that actually existed. Therefore, there were dragons, and they breathed fire. Now let’s steal some observations from paleontology and crudely reconcile them with dragons, and voila! 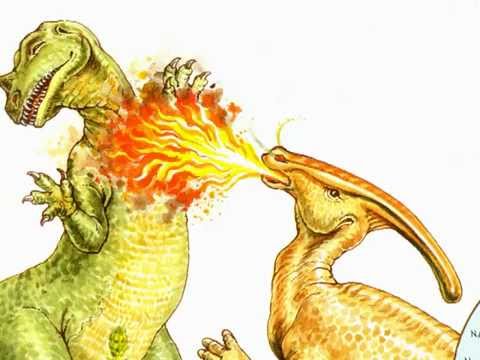 I’ve got my own little library of creationist nonsense, and they do this all the time. Answers in Genesis still pushes this ridiculous idea as essential to justify their dogma that humans and dinosaurs coexisted.