Nothing to see here, nothing to worry about. Move along, move along. 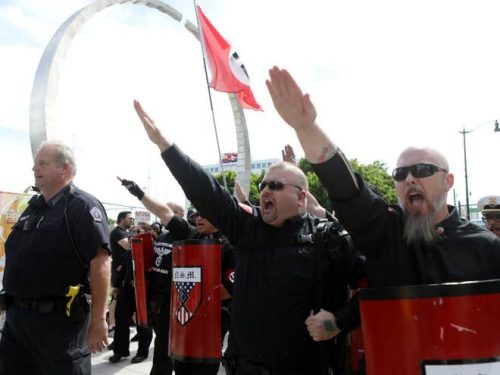 Really, no problem at all. It’s just a few armed neo-Nazis crashing into a Pride parade.

Photos from the event, which was attended by thousands of LGBT+ supporters, showed a group of around 10 neo-Nazis marching surrounded by police officers.

Dressed in black with a number carrying firearms and shields, the NSM marchers tore apart pride flags and pushed over at least one counter-demonstrator. One even appeared to urinate on an Israeli flag.

See? They were supported by the local police, so you know it was an entirely trouble-free and socially acceptable intervention. They didn’t mean any harm, as a few quotes from the NSM show.

[The National Socialist Movement] NSM will be armed and counter-protesting the freaks, wrote Burt Colucci, the self-identified “commander” of the neo-Nazi NSM, on Russian social network VK.

NSM, lets put some boots on the ground!! I don’t really give a damn about op-sec or Antifa in this situation. We go in with Swastikas blazing and if people don’t like it, tough shit…

I might have been concerned and distressed, but no milkshakes were thrown. I repeat, there were no milkshakes. Thus was civility and order preserved.

Class Photo » « A gathering of the broflakes