Oh, boy, another conference: The “They Are Real” Crypto Conference to be held at the Mt Blanco Creation “Museum” in Texas. Everyone ought to go, it’s cheap at $30. I’d go, except I’m on a greatly truncated budget this year — someone tell Aron Ra he ought to attend, he’s right there somewhere in the small state of Texas, too. 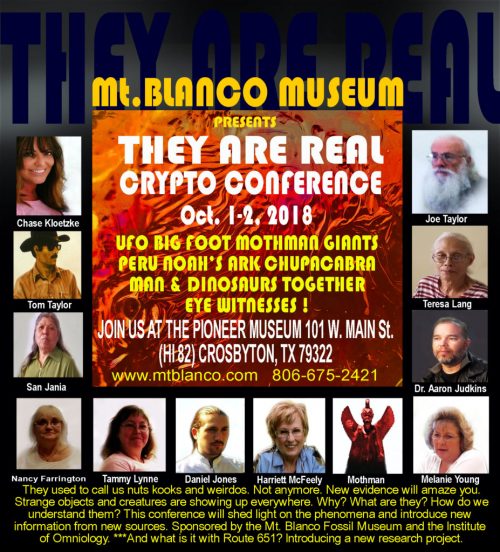 I don’t know who any of these speakers are, except Joe Taylor (loony proprietor of the Mt Blanco Creation Museum) and Mothman (I’m impressed that they got it as a speaker). Not even Google knows who they are; there are so many Tom Taylors and Daniel Joneses that they just get lost in a sea of names, and seem to have done nothing to make them stand out. OK, I could find Kloetzke on the basis of her unusual name — she’s a UFO investigator. And Judkins works with Carl Baugh, somehow.

But look at the topics! UFO BIG FOOT MOTHMAN GIANTS PERU NOAH’S ARK CHUPACABRA MAN & DINOSAURS TOGETHER EYE WITNESSES! PERU is a rather large topic that isn’t necessarily nuts, but I think that’s being used as a code word for ANCIENT ASTRONAUTS and BAD ARCHAEOLOGY.

I also like that line, They used to call us nuts kooks and weirdos. Not anymore. Sorry, guy, we still do, and you still are.

You want details? They sent more in an email.

MOTH MAN: There will be eye-witnesses. FIVE sightings of the very strange and terrifying Moth Man in Crosbyton alone. A woman hit one and dented her car. It was as tall as a man but had wings. When she approached it, it stood up and flew away. Another one chased a pick up at high speed at Sundown, Texas. News reports of them terrorizing towns in West Virginia and Iowa have surfaced.

BIG FOOT: How many bullets does it take to stop an eight-foot-tall Big Foot? The man who knows will tell you at the conference. What do they eat? Do they leave gifts? The Big Foot Lady and her neighbor will tell all about it. Are they human??

UFOs: Two cowboys saw a UFO in Blanco Canyon. What did it do? What did another cowboy see that convinced him he was not seeing a known aircraft?

CHUPACABRA: This weird vampire dog called the “goat sucker” and the “hell dog” in Mexican folk lore was just what they said it was. It was not a myth. The Mt. Blanco Museum in Crosbyton, had the best specimen of El Chupacabra. The carcass of it and a coyote were both examined in a University lab to see exactly what it is. They’re not a mangy coyote. Tom Taylor will describe the one he encountered in Lubbock, Texas.

NOAH’S ARK: You’re daring death to climb Mt. Ararat searching for Noah’s ark. Aaron Judkins did just that and got a Hollywood film crew to go with him! He will explain how hard the whole ordeal was.

ELONGATED SKULLS OF PERU: No American has spent more time with these very strange, very long skulls from Peru than Joe Taylor, curator of the Mt. Blanco Fossil Museum. With their having only one parietal bone, instead of two – (the two halves of the top of the skull) – and then having sometimes two dozen extra bones in the skull, it is easy to see why so many researchers wondered if they were alien instead of human. Taylor says, “Spending weeks with those skulls studying them in order to mold them and having made accurate reproductions of them has given me insights that I wouldn’t have had otherwise.” He was part of the LA Marzulli WATCHERS team and Brien Forester, that recently did a press release on the DNA results of these skulls. Accurate casts of them will be on display at the conference. Heard of the Star Child Skull? Researchers were convinced it was alien. The woman who owns it will be here to talk about it. An exact cast will be on display.

THEY ARE REAL is a conference to educate people, especially those who are reluctant to even discuss these strange phenomena. “The TV series Ancient Aliens talks about a lot of these subjects, but their view is pretty one-sided”, said Joe Taylor who is the organizer of the conference. Taylor continued, “I know some of the people on that show and they don’t give the whole story.” They bring in the Bible, but their take on it is skewed. Several of the skulls and artifacts I have worked on somehow show up in the show and on many websites. It irks me that they throw around fantastic dates on these objects that I know are not true. Thus, our conference.”

YES, THERE’S MORE – The mummified hand will be on display. It’s not human. It’s not a bear… It came from Big Foot country. What is it? Don Monroe is a true living Indiana Jones. He will be here to discuss the hand and so many incredible adventures that your head will spin!

Still, what makes this interesting is how they just smoosh up a wild collection of miscellaneous bad ideas, all unrelated to each other, and toss them all in a sloppy pot of conspiracy theory and bible worship and magic monsters, and each speaker probably has their own ludicrous obsession, but as I’ve seen at other events, no one will disagree with anyone else, regardless of how foolish their hypotheses are. It ought to be called a credulity conference. 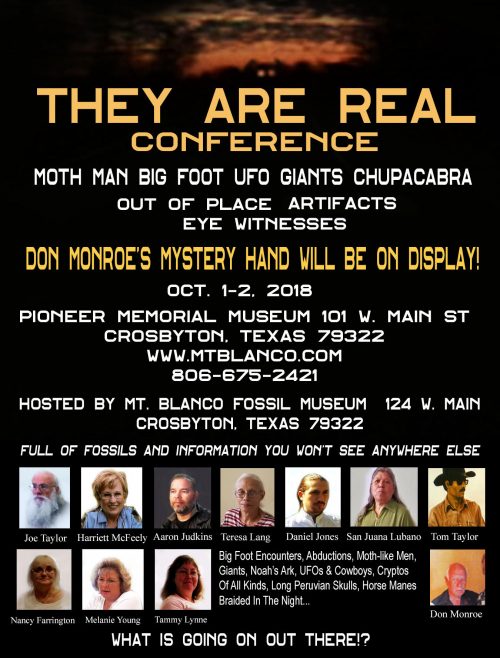 Friday Cephalopod: Flaunting it » « Behold, the beginnings of my SPIDER ARMY!