One must be guided there, gently, with a series of increasingly radical leaders.

Over at the really racist forum, “The Right Stuff”, the mob of neo-Nazi scum there were chatting about their path to open, proud, assholery, and the SPLC has dissected their commentary. There are no surprises here — they all cite the same old familiar scum, with Jared Taylor and 4chan at the top of the list of influencers. 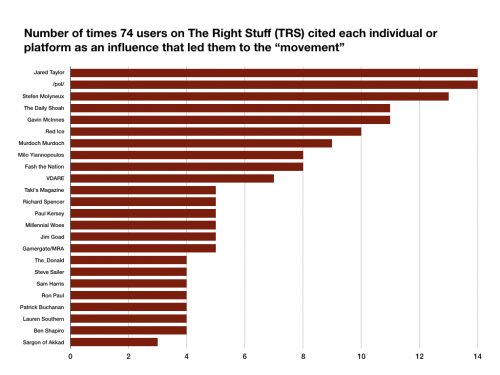 The number of times each individual or platform was mentioned as an influence was tallied, and those mentioned by three or more posters are listed in the chart below. Disconnected as they might seem, the most cited influences — the “politically incorrect” 4chan board /pol/ and the American Renaissance editor Jared Taylor — hint at two common paths to the alt-right: either through participation in the rampantly racist and misogynistic online trolling culture of 4chan and its offshoots, or through exposure to Taylor’s variety of pseudo-academic “race realism” that couches timeworn racist tropes in the language of science.

Within alt-right spaces like TRS, these two fibers of the movement are woven together — resulting in an ironic, meme-ified version of old-school race science — and embellished with antisemitism.

Taylor is a terrible, awful fraud who pretends to be scientific, but here online you may be more familiar with the poisonous taint of 4chan, which was also heavily into promoting Gamergate. You remember Gamergate — that obnoxious movement of young men who piously declared that it was all about “ethics in gaming journalism”, a phrase that can only be uttered sarcastically, but was really about flaming misogyny. This guy admits it:

Chan culture was male-dominated and heavily misogynistic. The sexism of these spaces eventually led many into the alt-right. According to one poster, “I always hated feminism and female empowerment, despite liking many elements of the left. When I got older and realized the left was only open to feminists or allies i stopped claiming it.”

This extreme anti-feminism gave fuel to various factions of male supremacy, like Men’s Rights Activists (MRAs) and MGTOWs (“Men Going Their Own Way”), who profess to forswear women completely, then complain about them constantly on the internet. Then came Gamergate, a harassment campaign against women in gaming that began in 2014. Anonymous harassers targeted women who worked in or commented on the industry for daring to enter a male-dominated space. Abusers used 4chan and other platforms to organize. After choosing their targets, the mob would dox them, send them rape and death threats, distribute fake pornographic images of them and generally stalk and torment them relentlessly.

It was an extremely important moment in the development of the alt-right, when young men from right-wing online spaces came together in a shared campaign against the “politically correct” culture of the left. One poster described the years 2012 to 2014 as a political “void,” but explained that he was brought back into politics — and entered far more extreme spaces — thanks to Gamergate. After 4chan’s founder Christopher Poole banned discussions of Gamergate from the site, the campaign’s supporters migrated to the more extreme 8chan.

It was all in good fun, right? Funny how the people who drop the word “witch hunt” into conversation so rarely apply it to Gamergate.

Also, I wish this weren’t the case, but there’s another gateway to racism low on the list.

The “skeptics” movement — whose adherents claim to challenge beliefs both scientific and spiritual by questioning the evidence and reasoning that underpin them — has also helped channel people into the alt-right by way of “human biodiversity.” Sam Harris has been one of the movement’s most public faces, and four posters on the TRS thread note his influence.

Under the guise of scientific objectivity, Harris has presented deeply flawed data to perpetuate fear of Muslims and to argue that black people are genetically inferior to whites. In a 2017 podcast, for instance, he argued that opposition to Muslim immigrants in European nations was “perfectly rational” because “you are importing, by definition, some percentage, however small, of radicalized people.” He assured viewers, “This is not an expression of xenophobia; this is the implication of statistics.” More recently, he invited Charles Murray on his podcast. Their conversation centered on an idea that lies far outside of scientific consensus: that racial differences in IQ scores are genetically based. Though mainstream behavioral scientists have demonstrated that intelligence is less significantly affected by genetics than environment (demonstrated by research that shows the IQ gap between black and white Americans is closing, and that the average American IQ has risen dramatically since the mid-twentieth century), Harris still dismissed any criticism of Murray’s work as “politically correct moral panic.”

Oh, yeah, other phrases I’ve come to despise: “politically correct” and “moral panic”. Harris is really good at using all the buzzwords frequently; no wonder he grates on me so much.

Anyway, although I’m sure there are plenty of people who’ve grown up steeped in raging racism from birth, it’s interesting to see how new blood is nurtured into pure evil.

“Evangelical” is just another word for “hypocrite” » « That’s Richmond, Ohio, not Richmond, Virginia