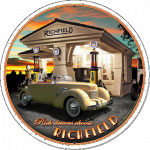 Oregon just made it legal to have self-service gas stations. Much of the rest of the country is probably simply surprised that there was anywhere where you had to have a service station attendant pump gas for you. A few Oregonians are freaking out at the change.

“I don’t even know HOW to pump gas and I am 62, native Oregonian…..I say NO THANKS! I don’t want to smell like gasoline!” one woman wrote in a comment on a survey the new station posted Dec. 29.

You put the nozzle in the hole and you squeeze the handle. You’re welcome!

Of course, I have some special expertise here. When I was a kid, my dad worked at a gas station — just a gas station, no mini-mart, just a bay where you could get your oil changed or tires rotated, with a row of pumps out front, and I’d help out on weekends. You’d pull up, roll your window down, and I’d come running out with a chipper smile, and you’d tell me what you’d want — “fill ‘er up with $5 worth of premium!”, which, actually, would be enough to fill up a big tank — and I’d ask “Check your oil? Wash your windshield?”. I guess it was convenient for drivers to have someone tend to your iron chariot for you, but it was kind of soul-deadening for the attendant. Also, it was just required that we do that stuff, it’s not as if anyone ever tipped you for great window-washing or oil-checking.

I don’t think anyone should mourn the loss of jobs, or the rise of old people dousing themselves with gasoline. The former: those are lousy jobs. The latter: what kind of klutz are you? Also, everyone in Oregon who has driven out of state is totally familiar with self-service.

Although, I have to say, here in Minnesota in January I wouldn’t mind if could sit in the car and have someone else stand out there in the bitter cold and fierce winds and fumble with cold metal. But then that would be an even crappier job for someone than what I experienced in temperate Washington state.

I asked God, Michele, and he said “NOOOOOOOO!” » « How can you show that something does not exist?