I read this paper:

And now I give you a quick summary of a couple of figures that I know you’ll find useful if you’re teaching genetics. 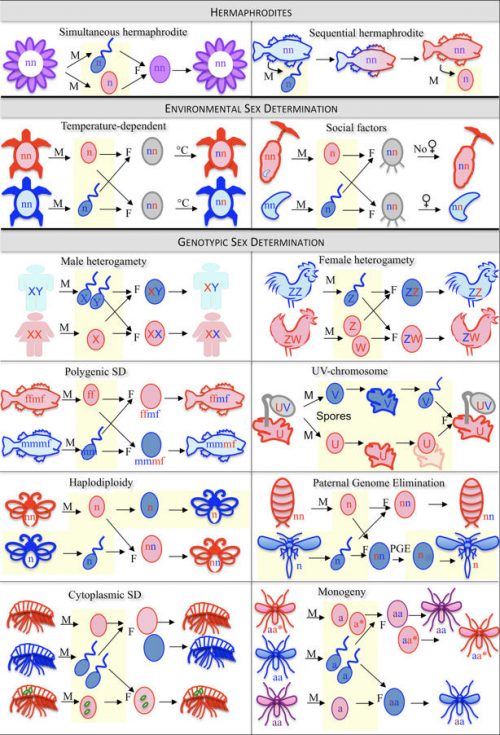 Schematic overview of some sex determination (SD) mechanisms.
M refers to meiosis, F to fertilization. Haploid stages (n) are indicated as shaded areas and diploid stages (nn) are unshaded. Hermaphrodites: Most flowering plants (and gastropods and earthworms) simultaneously contain both male and female sexual organs (simultaneous hermaphrodites). Many fish and some gastropods and plants are sequential hermaphrodites; clownfish, for example, are born males and change into females, while many wrasses or gobies begin life as females and then change to males. Environmental Sex Determination: In turtles and some other reptiles, sex is determined by incubation temperature of the eggs (temperature-dependent sex determination). Social factors can act as primary sex-determining cues: sexually undifferentiated larvae of the marine green spoonworm that land on unoccupied sea floor develop into females (and grow up to 15 cm long), while larvae that come into contact with females develop into tiny males (1–3 mm long) that live inside the female. Genotypic Sex Determination: Almost all mammals and beetles, many flies and some fish have male heterogamety (XY sex chromosomes), while female heterogamety (ZW sex chromosomes) occurs in birds, snakes, butterflies, and some fish. In mosses or liverworts, separate sexes are only found in the haploid phase of the life cycle of an individual (UV sex chromosomes). In some flowering plants and fish, such as zebrafish, sex is determined by multiple genes (polygenic sex determination). In bees, ants, and wasps, males develop from unfertilized haploid eggs, and females from fertilized diploid eggs (haplodiploidy), while males of many scale insects inactivate or lose their paternal chromosomes (paternal genome elimination). In some species, sex is under the control of cytoplasmic elements, such as intracellular parasites (e.g., Wolbachia) in many insects or mitochondria in many flowering plants (cytoplasmic sex determination). In some flies and crustaceans, all offspring of a particular individual female are either exclusively male or exclusively female (monogeny). 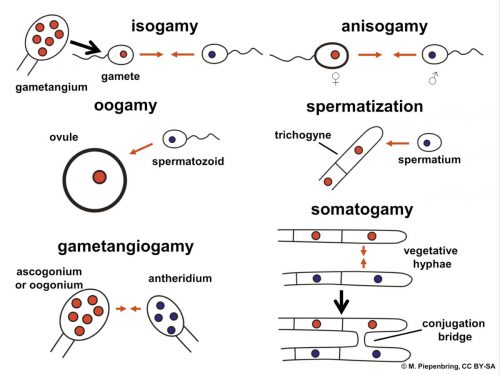