I thought this meme was a comical exaggeration. It’s obvious that gender is much more complex than a simple distinction between two categories, that there is a great deal of scientific support for that observation, and no one would be deluded enough to deny the science. 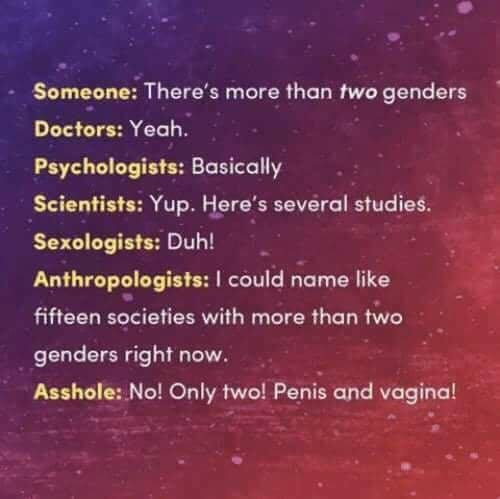 But then I read the comments. Apparently there are a lot of assholes out there who are eager to line up behind the asshole statement and flatly assert a) there are only two genders, men and women, and b) there is no scientific evidence otherwise.

So the author throws comment after comment at them, each one citing the scientific literature; she cites Science and Nature. You’d think just the obvious fact that there are human beings who don’t fit neatly into the stereotypical male and female pigeonholes would be sufficient to tell you that this binary model is inadequate.

But no. Commenters continue to assert that assert a) there are only two genders, men and women, and b) there is no scientific evidence otherwise.

I’ve been dealing with this phenomenon for decades, and you’d think I’d be used to it by now. I’ve dealt with it with my own binary thinking: there are people who arrive at conclusions by following the evidence, and they are the secular, pro-science community; and there are people who deny evidence to accept conclusions based on dogma, and they are the conservative religious, poorly educated masses. Some of those deniers in that facebook thread are certainly going to be conservatively religious, but as has become increasingly apparent, there are a lot of secular atheists who also engage in this behavior on certain issues. YouTube atheists, for instance, are dominated by looney-tunes dogmatists who assert that feminism is a cancer, who deny the significance, even the utility, of sociology and psychology and philosophy, and who have a simplistic and ultimately racist and misogynistic worldview that denies basic realities of the equality of all members of our species to prop up uncompromising doctrinaire notions of White Nationalism or Western Superiority or Manly Virtues.

They’re everywhere. They’re attending Mass and they’re going to atheist meetups. And there are egalitarians in churches and signing up for lifetime memberships in American Atheists.

If you want to understand what’s behind the erosion of support for the “New Atheists” and the Deep Rifts in our godless groups, all you have to realize is that the evidence-based community is looking at the evidence and seeing that assholes populate both the atheist and religious side of the pigeonholes, so the labels aren’t aligning well with our actual, substantial goals. And if your priority is following the evidence honestly where ever it leads, slapping the atheist label on someone does a piss-poor job of identifying your fellow travelers.

Science matters to me and it should matter to everyone. There are far too many obnoxious incompetents who think atheism is an acceptable substitution for science. It is not sufficient.

What is The Jewish Question, anyway? » « Ugh, Taibbi, that doesn’t make it all better