Another study has come out claiming a link between vaccinations and autism — and it has been retracted. The paper was deeply flawed in a lot of ways, but we can ignore the poor experimental design, the bad statistics, the cherry-picking of the data, and the funding from dubious sources, and focus entirely on one crystal clear concern: they faked their data. One of their figures is a jiggery-pokery jigsaw assemblage of gel bands copy-pasted into an image that bears little relationship to reality. 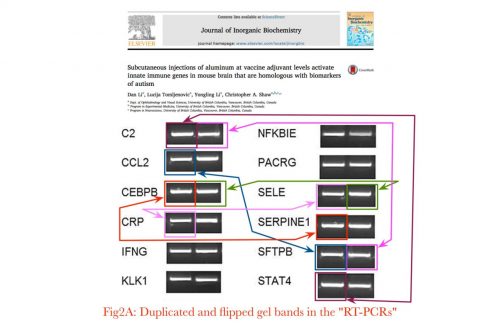 The principal investigator, Christopher Shaw, was confronted with these obvious, irrefutable facts of faked data, and he goes into an unconvincing song-and-dance of denial. He doesn’t know who could have done this or why, he says.

We don’t know how some images in the manuscript came to be altered. We investigated when the first suggestions came out in Pubpeer and confirmed that some of the images had indeed been manipulated. We don’t know by whom or why. The first author, Dr. Dan Li, denies doing anything wrong, but has not provided any information about this in spite of repeated questions from us. We are continuing to pursue these questions, but as she is now at another institution, we can’t force her to comply.

Those are outright lies. He knows. The figures for a paper do not simply manifest out of thin air — Shaw had to have discussed this illustration with Li. If he didn’t contribute directly to the paper himself, he is responsible for delegating the work. It’s got 4 authors on it; they had to have talked about the data, worked to interpret it, decided how these data supported their hypothesis, and put together a publishable story. The person who put so much remarkable effort into cobbling together a totally fake image had to have done so consciously — you don’t ‘accidentally’ make at least a dozen edits and reorganize the contents of an image in Photoshop.

Shaw also claims that the figures were not significant anyway. Then why publish it? This is another lie. They thought it was worth including in the paper, and someone went to considerable effort to mangle the data — why would they risk compromising their scientific integrity for a figure that they think doesn’t matter?

Faking data is the second most serious crime you can commit against science (the first would be ethics violations that do harm, which includes faking data). It is unforgivable. Retracting this paper is an inadequate response — the perpetrators ought to be fired, any grants rescinded, and there ought to be an asterisk, at least, on all of their published papers because their data is clearly untrustworthy. Two of the authors, Shaw and Tomljenovic, have a history of dubious work and past retractions. They still get published. The University of British Columbia is still defending them, which is unfortunate since it taints all the legitimate research done there.

Shaw is blaming others for his problems.

This is nonsense. Imagine it’s true that there is a conspiracy against you, and swarming trolls are trying to destroy your reputation. What would you do? Would you be particularly careful to make your work above criticism, consulting with colleagues to get a thorough inspection of your data and interpretations before publishing them, or would you get so sloppy that you would eagerly publish an easily detectable manipulated figure?

Fire the lot of ’em. Forging data is such an egregious crime in science that it ought to warrant retraction of tenure.

How to prevent sexual assault » « Need advice from WordPress experts