The evolutionist drifts, seemingly unknowing, from the safety of his herd. 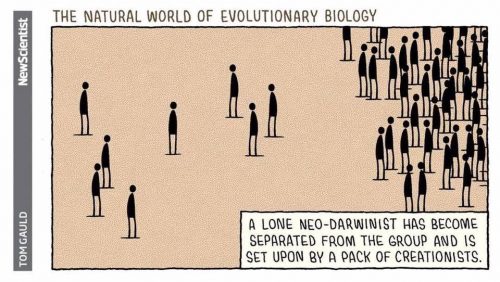 The evolutionist cowers down, trembling. The creationists converge avidly on the isolated scientist.

But wait, what’s this? As the mob surrounds him, there is a cruel glint in the eye of their solitary victim — a slowly growing grin, exposing canines like needles, incisors like razors, long rows of jagged splintery back teeth. Claws emerge from their sheaths, and keep emerging, long as sabers. The evolutionist laughs a harsh, triumphant laugh and leaps up, whirling and gnashing and slashing. A half dozen creationists fall with deep gushing wounds, and the rest run away squealing.

I don’t know why the cartoonist failed to include a few more panels that would have shown the fun stuff.

Aw, Tom Petty no more » « I get Catholic email, still