His ill-informed views get another long airing in which he gets to present his self-pitying schtick of being a martyr to intolerant scientists, and how he’s a true revolutionary who’s going to change the modern paradigm. He’s basically full of shit. The whole article could have been truncated to its early statement of the premise:

Since the early ‘80s, he has believed that humans are the result of an errant sexual encounter between our closest relative, the chimpanzee, and the animal with which we seemingly share all aforementioned traits: the pig.

Followed by this one paragraph buried deep in the story:

The most damning refutation of McCarthy’s hypothesis is “the absence of any pig or pig-related genes in the human genome,” according to Roger Butlin, a professor of evolutionary biology at the University of Sheffield in Britain. Instead, the human genome is “entirely consistent” with the explanation that humans are great apes, most recently sharing an ancestor with living chimps and bonobos, he said.

Yep. If we were pig-chimp hybrids, it would jump out at us from the data. The sequences aren’t there. We’re done.

If McCarthy did crave more recognition from mainstream experts (he doesn’t, he insists), his best bet would be to look for a signature unique to pigs in the DNA of humans but not other apes, said John McDonald, a biology professor at the University of Georgia and a former advisor of McCarthy’s.

A few years ago, McCarthy tried to do just that. He and a friend wrote a computer program to search the human genome for traces of pig hybridization. But the task was too computationally intensive. “It would have taken a lifetime to process the data on the small computers we had access to,” he said.

So he tried to reinvent BLAST, a publicly accessible program that you can run on NIH’s computers over the internet, and couldn’t get it to go. You know, ya great goofy loon, you could also pick up any of a number of molecular phylogeny papers and find that other people have done the work for you. That’s what molecular phylogeny is all about: you gather a bunch of DNA sequences from a bunch of different species, and you compare them and weigh the differences, and you throw them into a computer program that churns through all the species and all the genes and spits out a summary of how closely related they are. It’s been done! The pig and chimp lineages separated in the Cretaceous. 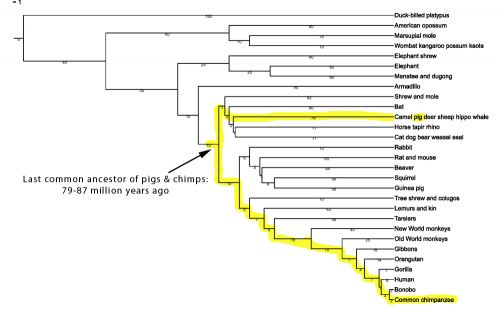 Can we just be done with this? Media, ignore the clown capering over there — there are good science stories to discuss.

I do have to end with one final quote from McCarthy.

There’s also another reason McCarthy remains so attached to his ideas: He believes altruism, not competition, is the way of the world. With neo-Darwinism and natural selection, competition is a fact of life, and that logic can be used to justify war, conflict, and ethnic cleansing (“Darwin’s biggest fan was Hitler,” he said).

That’s a common creationist claim, but it’s wrong. Hitler was not a fan of Darwin, and even if he were, it would not have the slightest implications for the truth of the theory.