Let’s look at a painfully naïve understanding of science.

There is a germ of truth in that: scientists use reason, we hope, to interpret data, “facts”, to arrive at a conclusion, but it’s more complicated than that. Science is a process, not the “cold, hard facts” themselves, and it is a process that is supposed to place a check on the subjectivity of scientists. It’s odd, though, to see science reified to the point that we can assign human values like “objectivity” to it.

I’ll use a couple of examples to explain why that understanding of science is wrong.

This is a fist-sized rock. It’s real. You can measure its dimensions, weigh it, break down its chemical composition, determine its location in space and time. It is a “cold, hard fact”. But as far as science is concerned, it’s not very interesting, and wouldn’t warrant a museum exhibit or a paper being written about it. 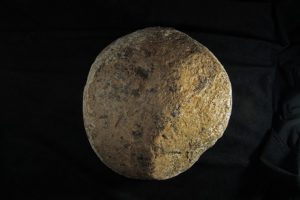 Where it gets interesting is in the context of a theory or explanation. This is a rock found in association with a recently excavated mastodon skeleton. What provokes discussion is that it is proposed to have been a hammer used by hominins to help butcher the mastodon.

It’s an explanation that is in dispute. Most anthropologists are dubious. Of course, if it’s just a random, eroded rock it becomes a pointless, unsurprising “fact”, because rocks are mundane and common; if it’s confirmed as a stone tool, it becomes a career-making discovery.

Here’s another “fact”. We have some “measurable data” on the age of the mastodon.

Since 1993, the team, including lead author Steven Holen, have repeatedly tried to date the mastodon fragments, using techniques like carbon-dating. They repeatedly failed. They only succeeded when they turned to uranium-thorium dating, which looks at the decay of two radioactive elements. That gave an age of 130,700 years, give or take 9,400 in either direction.

130,700±9,400. Sure sounds measured and specific and sciencey. It’s also a radical surprise — we don’t think people were living in North America 130,000 years ago! Most anthropologists still don’t. That number is in question.

“There are a small number of uranium-thorium dating specialists who think bone can be dated,” says John Hellstrom from the University of Melbourne—who isn’t one of them. “The problem is that uranium moves around in bone, which invalidates the dating unless you can use a mathematical model of that movement to compensate. That is exactly what the authors of this study have tried to do.” Coupled with other evidence about the surrounding rock layers, the bones are “likely to be something around the age the authors claim,” he says, “but I would not give these dates hard-evidence status. More correctly, they indicate the bones are most likely at least tens of thousands of years in age.”

See, this is where we disagree on the meaning of science. Some want to say it’s about absolute truths, crystal-clear facts laid out in the grand Book of Nature. Some of us think instead about complexity and context, that we’re trying to use evidence to reduce uncertainty and converge on models that best explain reality. The scientific meaning of that rock will change as we gather more evidence, develop more tools for examining it in greater detail, look at other sites of similar age, and work to confirm or disconfirm the idea that it is an ancient hammer. Science will change its interpretation, because it is a process that constantly evaluates and re-evaluates the data, and gathers new data that requires modification of our understanding.

And we’re cool with that. That’s how it’s supposed to work. We don’t deal in absolutes.

I think it’s extraordinarily unlikely that it’s an ancient hammer ten times older than any other artifacts we’ve found on the continent, and I’m OK with that. If more evidence emerges of people living in North America 100,000 years ago — which I wouldn’t bet on occurring — then I’m also OK with that. A good scientist should be a leaf on the wind.

Here’s another example of “measurable data and observable phenomena”: digit length ratios and gender. Women are supposed to have a shorter ring finger, relatively, than men, and subtle variations in the ratio of the length of the ring finger to the index finger are supposed to be indicative of everything from sexual orientation, to sperm count, to aggressiveness, to adult hormone concentrations.

I’ve seen people present that difference as a “cold, hard fact”, too. It’s not. It’s a smear of ratios, with only a rough statistical correlation, and no predictive power at all.

That’s the danger of that quote at the top of this article. When you treat science as a collection of facts, you shut down questioning and exploring the complexity of reality — you short-circuit the process, which means you aren’t doing science any more. That doesn’t mean there are no truths in science — evolution is a fact, as is global climate change — but that those facts are more subtle and fluid than most people imagine, and all of them are provisional and subject to re-evaluation.

But there are even more errors at that link. The purpose of the article is to criticize Bill Nye’s new show, Bill Nye Saves the World, which is fine. There is much to criticize in it — I found it a bit superficial and with a style I find annoying, but the thing is…it’s a show intended to reach people other than already-confirmed science educators like me, so it’s fine that I’m not the target. It’s more than fine — I think diverse approaches are necessary, and applaud the blooming of a thousand flowers, which are not all old, white, and male.

But once again, this critic approaches it with his own flawed biases. He watched the show about “The Sexual Spectrum”, and was horrified.

The only “science” mentioned in the episode about sex comes during the first segment when we are informed about sex chromosomes and their function. If you are XX you are female, and if you are XY you are male. Most all of us learned this in school. But Nye is quick to point out that this binary way of looking at things is outdated. Some people have more than two sex chromosomes. Some have only one. Indeed, he instructs us, people don’t really fall into binary categories of male or female, but exist somewhere on a sexual spectrum with male at one end and female at the other.

That is a very revealing paragraph. What constitutes science, to him? Descriptions of chromosomes. He’s already narrowed the slit he views the world of science through to a remarkable degree, because at the very least his reductionist perspective should include endocrinology, and molecular biology, and cellular responses (I understand how many narrow scientists would exclude such things as psychology and sociology from the domain of science, but at least he’s got to understand that there’s more to sex than just chromosomes, right?).

But then he goes on to get the one allowed piece of science wrong!

If you are XX you are female, and if you are XY you are male.

Then it gets worse.

Nye mentions that there are abnormalities in the sex chromosomes in 1 in 400 pregnancies, which he calls “quite a lot.” Calling it a “spectrum” suggests that most of us would be neither XX or XY but something in between. Generally the extreme ends of the spectrum represent the minority with most people somewhere in the middle.

Yes, 1 in 400 is “quite a lot”. It means that at my university, there are probably about 4 students with a chromosomal abnormality of the sex chromosomes, and that’s probably a low estimate. You probably know people with this kind of variation, but the thing is, it usually doesn’t jump out at you as some easily visible phenotype. A surprising number of people show up at fertility clinics with problems in reproduction that only then are discovered to be due to a sex chromosome abnormality.

But here’s how that writer deals with the “cold, hard fact” that a significant number of people in our population have a variation in chromosome number: by trying to argue that the percentage is even lower, as if that matters, and trivializing the existence of the minority.

The fact that abnormalities occur does not negate the norm or render the idea of the norm meaningless. What is more telling, that 399 out of 400 children are born with typical XX or XY chromosomes or that 1 out of 400 is not?

So…what do you propose we do with that 1 out of 400? Ignore them? Pretend they don’t exist? Allow the self-righteous Norms to persecute them? They are real, they exist, they have just as much right to exist as someone with an XY chromosome pair. Their existence is also not a rebuke to the 399 out of 400. It just is. If you’re a scientist, accept that.

There’s another weird thing in his comments.

Generally the extreme ends of the spectrum represent the minority with most people somewhere in the middle.

He seems to have confused a bell curve with a spectrum. No, that is not true. If it were, since the middle of the visible light spectrum is about 570 nm, rainbows would be mostly yellow-green. That the human sex chromosome distribution is strongly bimodal with large peaks at XX and XY does not mean there cannot be a spectrum of intermediates. But then, his approach to refuting the idea of a spectrum of sexuality is to a) minimize the existence of known intermediates, and b) then pretend that they don’t count as a “spectrum”, because they don’t fit his predefined and incorrect understanding of what a spectrum is.

He ends similarly with his biased interpretation of the purpose of sex.

Surprisingly, for someone who supposedly champions reason, not once in this episode did Nye even raise the question What is sex for? Why are human beings sexual? There is no mention of children; no mention of marriage; no mention of love. No mention, in fact, of any sort of consequences for our sexual behavior. Bill Nye speaks in this episode of how things are “in the real world” but one gets the impression that he hasn’t lived there in quite some time.

Well, gosh. If he’s going to reduce sex to his narrow “scientific” interpretation of “cold, hard facts”, why is he bringing up love and marriage? Yeast have sex, you know, but they tend not to bother with religious rituals, and I rather doubt that love is involved.

If Nye had brought up the topic of the purpose of human sex, I’m sure it would have been even more offensive to a Catholic minister.

Sex is for reproduction.

Sex is for pair-bonding.

Sex is for fun.

Sex is for sale.

Sex is for political alliances.

Sex is for entertainment.

Sex is for demonstrating submission.

Sex is for conformity.

Sex is for psychological release.

Sex is for trading for favors.

Sex is for religious celebrations.

Sex is for dominance displays.

Sex is for consolation.

I’ve noticed that the “real world” seems to have a lot of people and behaviors who aren’t exactly like me and mine. That doesn’t offend me at all. I think I’d rather encourage everyone to be themselves and be happy, than to arbitrarily decide to be like me and be miserable (I’m happy as I am, but wouldn’t expect others to be).

Likewise, you don’t have to like Bill Nye’s new show. I’m neither into gay sex or Bill Nye Saves the World, and that’s just fine. If it opens up a better perspective on science than too many self-identified “science” advocates have, then more power to it.

How much free speech do you want for free? » « You can fake peer review?