I’ve hiked hazardous routes along the Washington coast — it’s a beautiful place with these gorgeous crescent beaches separated by spectacular rocky headlands — and before you set out you have to heed all the warnings. If you get caught on those headlands when the tide comes in, you may have to choose between going straight up a jagged, overhanging cliff or swimming out to sea in a swirl of complex currents. There are also bears.

I don’t think I’d want to hike the Broomway in England, though. 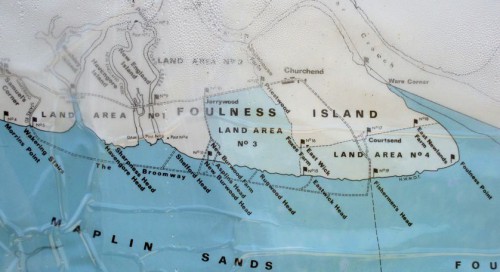 For one, at low tide, it’s a long gray mudflat. It’s not exactly scenic.

For another, the destination of your walk is a place called “Foulness Island”. This is not a name that would have been chosen by any tourism board. Saying you live on Foulness Island conjures up images of surly, decrepit villains hiding out in hovels and scheming bitterly to murder visitors and steal their shoes to enable escape. It sounds like a place infested with ticks and anthrax.

Depending on the time of year, you have a window of three to four hours to explore the Broomway before the tide returns. Unlike other tidal flats where the water gently rises, the speed of the incoming tide is described as faster than a person can run. Even worse, the rising waters interact with outflow from the nearby Crouch and Roach rivers to create deadly hidden whirlpools.

Nearly every site I’ve visited warns that no matter how good a swimmer you are, if you’re caught on the Broomway when the tide comes in, you’re likely to perish.

Still interested in taking a jaunt down the Broomway? You’ll first need permission from Britain’s Ministry of Defence. The military took over much of Foulness Island in the early 20th century for artillery exercises and still controls access. Adding to the path’s notoriety are large signs near the entrance warning “Do not approach or touch any object or debris as it may explode and kill you.”

In case you’re wondering, it’s the first week after Spring break, and I was already fantasizing about exotic island getaways, and this was one of the places that turned up in my google search. I think I need to come up with better search terms. Or erase my contaminating search history somehow.

Take my money now » « That’s half the story