So, Donald Trump paid a visit to Minnesota today, which was odd and pointless. This state is pretty much a lock for Clinton, but he flew in, claiming that there’s going to be a surprising upset in the state. He drew a few thousand deplorables to cheer him on, like this fellow: 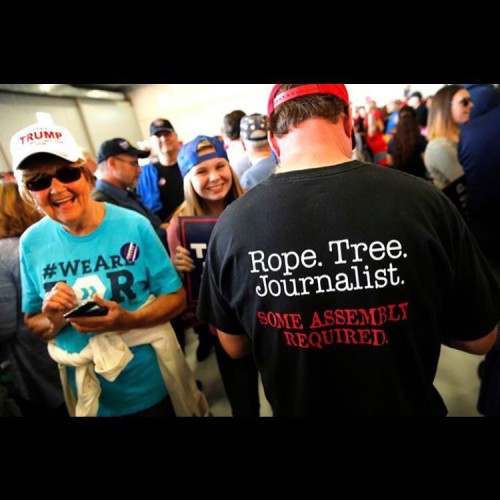 I don’t think that’s the kind of appeal that will work here, and it’s kind of delusional of him to think so.

He also spent a lot of his time raging about those horrible immigrants in Minnesota.

Trump charged that too many Somali immigrants were admitted with faulty vetting and later recruited by radical elements. “A Trump administration will not admit any refugees without the support of the local communities where they are being placed,” he said. “It’s the least they could do for you. You’ve suffered enough in Minnesota.”

We’ve suffered? Hang on there — we have a lot of Hmong and Somali immigrants here, and they don’t make us suffer. They’re good people. I’ve got a fair number of them in my classes, and they do as well as the third and fourth generation immigrants (like almost all of us) and as well as the native population. I don’t resent them at all, I’m glad to have them here…so what is this bullshit with a loud-mouthed New York millionaire tax-dodger flying in to tell us who belongs here and who doesn’t?

The person I’d like to kick out is a certain ranting orange thug. You know, the kind who encourages his fans to murder people.

Positive evidence for Hillary Clinton » « The power of self-delusion