The theme for next summer’s Convergence, has been announced, and it’s a good one: To Infinity & Beyond! 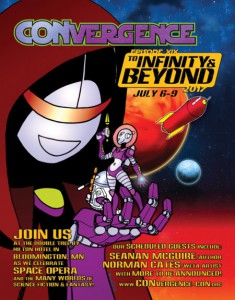 Set on a grand stage of sociopolitical intrigue, melodrama, and conflict, space operas have woven worlds of fantastic adventure and romance to capture our imaginations since the 1930’s. CONvergence 2017: To Infinity & Beyond is a celebration of all things space opera. Whether the hero is fated to a mythic destiny through blood or prophecy, or simply an average galactic citizen caught up in incredible circumstance, their adventures satisfy our hunger for the optimistic triumph of the individual and the common good.

Follow Yale athlete Flash Gordon’s strange odyssey towards interplanetary hero and uniter of planet Mongo, Rey escaping Jakku to join the resistance and realize her connection to the force, or Barbarella’s journey of personal discovery during her mission to rescue the scientist Durand Durand—when we dive into a space opera, we are truly along for a ride of epic proportion. Lovers Alana and Marko struggle to stay together as the battle between the technologically advanced Landfall Coalition the magic-using people of Wreath threatens to tear them apart in Saga. Paul Atreides dodges conspiracy to explore his destiny as religious leader of Arakis’s warrior Fremen in Dune. An Imperial Radch AI embarks on a desperate mission to uncover the truth behind her lieutenant’s murder in Ancillary Justice.

Meanwhile, in not-science-fiction, even more extrasolar planets have been identified, and some of them even look semi-habitable, maybe.

One of the most interesting set of planets discovered in this study is a system of four potentially rocky planets, between 20 and 50 percent larger than Earth, orbiting a star less than half the size and with less light output than the Sun. Their orbital periods range from five-and-a-half to 24 days, and two of them may experience radiation levels from their star comparable to those on Earth.

And meanwhile, in not-exactly-space-opera-but-is-it-really, there’s been a lot of appreciation for Octavia Butler lately, with people noticing the peculiarity of her fantastic stories not getting their deserved attention from Hollywood. And that makes me wonder if our vision of what is space opera is always seen through a white person’s lens. I hope we can see more “science fiction worlds from a hyper-marginalized lens”. Butler wrote classic sci-fi about aliens and space travel, but always from a weird and often curiously biological perspective — it wasn’t about space empires and space colonialization. Nnedi Okorafor also writes great SF, but with central characters who aren’t modeled after Flash Gordon. You’ve all read Binti, right? And then there’s Samuel Delany — amazing stuff from a gay black man.

So I’m a bit enthused about the prospects for next summer’s con — the topic is wide open for some real science, some standard popular tropes, and for an opportunity to expand our minds. I’m going to have to think about some panel suggestions, but you’re welcome to suggest some, too.

The statistics don’t lie: the real reason Trump must be defeated » « Bye, Bill