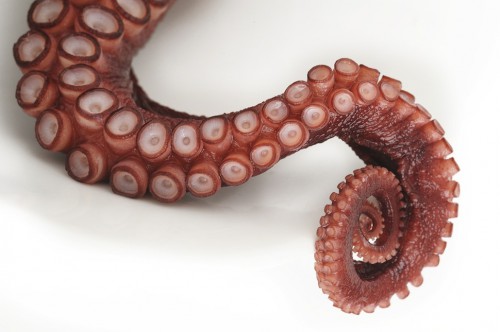 Who among you has taught or studied vertebrate anatomy? I have. It’s cool. Skeletal and muscular anatomy are weird, though, because we so take the principles for granted that we’re often not aware of it. We can move because we have a jointed framework, a collection of levers that are moved by the contractions of muscle fibers, which have distinctive attachments and insertions via tendons on those bones (or, in some cases, the muscles attach to sheets of connective tissue called fascia). The musculoskeletal part of anatomy classes consists of a lot of memorization of muscles, their origins and insertions, and the effect of the action of contracting the muscle. In some ways, vertebrate limbs are actually rather crude, made up of bony rods with joints that are prone to failure (I am very aware of that as I get older), with a collection of long muscles cobbled together to carry out specific movements.

The muscles themselves are neat: every muscle cell is a fiber that has to stretch the entire length of the muscle. In humans, that means some cells may be as long as 60 cm! And the organization of skeletal muscle is exquisite: look at them with a microscope, and the contractile machinery consists of tidy arrays of filaments. In this side view, you can see alternating overlapping bands of actin and myosin, and you can see why it’s called striated muscle.

End on, you can see that the fibers are all organized in a beautiful geometric array. 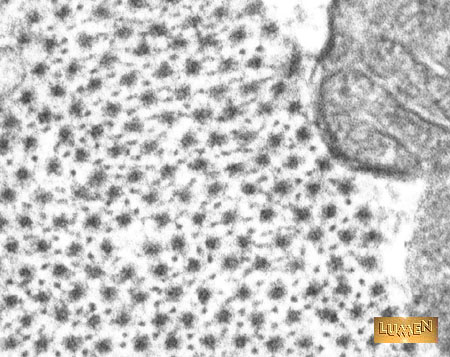 But stop. This isn’t the only way to make a contractile tissue. I first realized this when working with zebrafish embryos: no bones. Muscles in the myotomes don’t attach to bones at all — each segment contains fibers that extend the length of the segment, but they connect to plates of connective tissue at the boundaries between segments. The muscle cells themselves are familiar, containing those same parallel arrays of actin and myosin, all neatly aligned, but rather than pulling on bones, they tug on each other. Each segment contains four compact cylinders of fibers organized in a slightly helical fashion, and capable of bending the animal in any direction.

No bones, and no joints either. Instead, they have a central hydrostatic skeleton, a notochord, that is incompressible but flexible. This increases the efficiency of contractions in generating a lateral force, because they prevent the animal from compressing longitudinally. It’s likely to also act as an elastic spring to make swimming more economical.

We can get weirder still, though. Let’s look at cephalopods (you knew where this was going): no bones, no joints, no hydrostatic skeleton, just lots and lots of muscle. What are they pulling on? How do tentacles work? They writhe and bend and extend and grasp, bonelessly. From a vertebrate perspective, they’re just freaky.

So I found a good recent review of the musculature of cephalopod arms and tentacles. There were many surprises.

For one, there are no long muscle fibers anywhere — muscle cells are at most 1mm long. This makes sense — we have long fibers to stretch between joints, but cephalopod limbs are just one long series of very tiny, very flexible ‘joints’.

Next surprise: they have a novel (for a vertebrate…other invertebrate phyla show a similar pattern) arrangement of actin and myosin. Instead of all of the bands in a fiber being lined up in register, the filaments are staggered to form obliquely striated muscle. Pretty!

That’s it! It’s all about shifting the volume of the whole organ around. So when you look at a section of an octopus arm, you find a lot of transverse muscle fibers, a meshwork of fibers that act in the transverse plane to manage the diameter of the arm, and a lot of longitudinal fibers that can compress the length of the arm. Between them, they can fluidly change the shape of the cylinder from point to point. 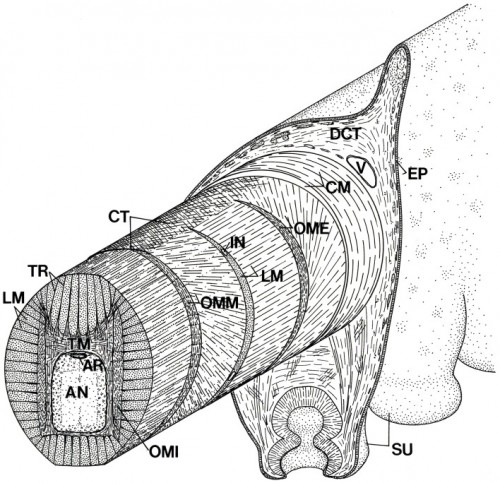 One other twist, literally. The arm is also surrounded by thin layers of obliquely oriented muscle fibers which can provide a torsional force, so the arm can also rotate. This is important because an arm has an oral side, with suckers, and an aboral side, lacking suckers. When an octopus wraps its arm around a crab, it also needs to be able to twist it so the sucker side is grasping its prey.

I am envious. I wish I had limbs like that — no more aching knees. But I have to be honest, there are some drawbacks.

One is that the amount of neural control required to regulate an octopus arm has to be massive. Humans, for instance, only have to control 23 muscles in each arm (not to belittle that, though: this is a combinatorial problem with agonist, antagonist, and synergist muscles working together in a coordinated fashion for every movement). Octopus muscle control is much more fine-grained, and while a lot of the maintenance of a motion is farmed out to local networks of neurons — an octopus does not have to consciously think about every sinuousity in its motion, no more than you have to consciously think about each arm muscle independently — it’s still got to involve some fascinatingly complex circuitry.

Another deficiency is that we take advantage of levers as force multipliers. Your forearm pivots on your elbow joint, and a small contraction of a muscle inserting near the joint can produce a much larger motion by your hand. We can punch and throw things with a force no octopus can ever achieve. A cephalopod isn’t going to be able to evolve a hammer like a stomatopod.

But, you know, I’ve never had much cause to punch anyone, so maybe if I adopted a lifestyle of langorous stroking and hugging and touching and sensing, I could be quite happy with an octopus arm transplant.

My hometown does good » « Predictability