You may notice a wild proliferation of parentheses on social media lately — that’s because it was discovered that white supremacists have been flagging the presence of Jews by bracketing their name with triple parentheses, so everyone is mocking them by putting our own names behind triple parens.

I thought these racists were already pathetic, but I did not know how low they could sink.

It’s worth noting that the internet’s anti-Semites hate when their culture is appropriated by their opponents. For example, when internet users started repurposing Pepe the Frog, a previously racist meme, a white nationalist lamented:

Most memes are ephemeral by nature, but Pepe is not… He’s a reflection of our souls, to most of us. It’s disgusting to see people (‘normies,’ if you will) use him so trivially. He belongs to us. And we’ll make him toxic if we have to.

Which makes stealing the bigots’ signature symbolism for Jews all the more fun.

Say what? This is Pepe the Frog. 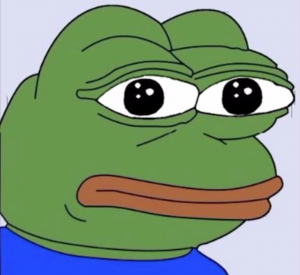 If that’s a reflection of their soul, that reflects very badly on their souls. Also, the character was part of a webcomic created by Matt Furie, so they actually don’t own it.