Mostly, the killer whales native to Puget Sound are salmon eaters. But there are also transient orca who cruise through the Sound, and their diets may be a bit more adventurous. And then this week the gray whales were passing by, and…uh-oh. Gang fight. 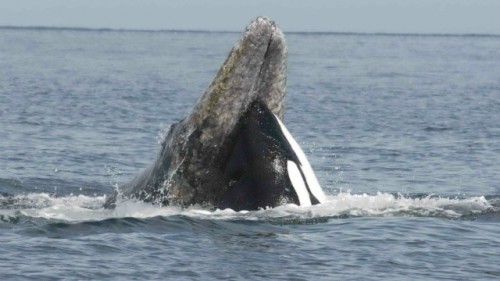 It’s that time of year.

The Great Migration of 22,000 Eastern North Pacific grays is well underway. As spring approaches, these massive creatures, which can reach 50 feet and 40 tons, begin an epic journey of between 5,000 and 6,800 miles from the warm-water calving lagoons in Mexico’s Baja Peninsula and Gulf of California to the Bering and Chukchi Seas, traveling constantly at about five knots and averaging 75 miles per day. It’s the longest migration of any mammal on Earth. Midway through the journey, from late February to the end of May, a small group makes a pit stop in Puget Sound — for the shrimp buffet.

Superbrains will not come out of a test tube » « “Biggest leak in the history of data journalism just went live, and it’s about corruption.”