A Texas law is going to allow students to open-carry guns into the classroom, so the University of Houston administration is doing the responsible thing, and informing instructors how to deal with armed students. Tell me if this sounds like good advice to you. 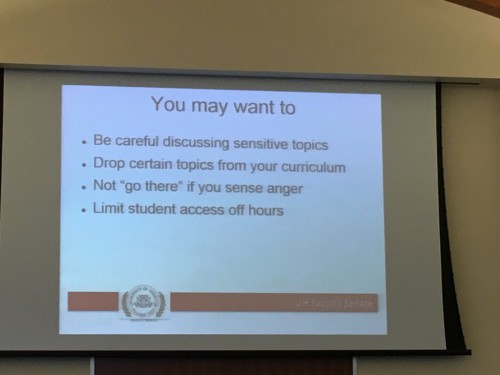 Good thing there are no sensitive topics in biology. No one gets upset about evolution, or reproductive biology, or biotechnology, or vaccines, or chemotherapy, or birth defects, or bioethics, or heritable traits, or…hey! If the administration ever tells me to drop controversial topics from my curriculum, I’ll be on easy street! I’ll just stroll in to every class, say “Let’s rap”, and we’ll just talk about non-stressful events on everyone’s minds, because all the subjects I teach have the potential to be controversial. This being Minnesota, we’ll just talk about the weather every day.

I feel for you people who teach political science, or sociology, or psychology, or any of those harder topics that everyone gets upset about. I’ve got it easy.

I think professors ought to consider some kind of class action lawsuit (with the reservation that I am not a lawyer). It sounds criminal to turn our profession into a dangerous occupation to the point where administrators advise us to not do our jobs.