As Denton says, the basic idea is that the form (structure) of modern organisms is a property of the laws of physics and chemistry and not something that evolution discovered. He would argue that if you replay the tape of life you will always get species that look pretty much like the species we see today because the basic forms (Baupläne) are the inevitable consequences of the underlying physics.

Say what? Look, I’m a developmental biologist; I was baptized in the Stygian stream of structuralism by D’Arcy Wentworth Thompson, I reacted and diffused with Alan Turing, I danced disco by the light of the Belousov–Zhabotinsky reaction, and no, that is not the structuralism I have studied. There is a grain of truth to it, in that structuralism does imply that there are physical/chemical constraints on form, but only the extremists would suggest that that means life on Mars would evolve to look like life on earth. That overlooks the fact that structuralists are thoroughly familiar with the diversity of life on this one planet, and since those physical laws can generate both mushrooms and monkeys, it’s clear that there is some room for exploration of form.

I can see, though, why creationists would gravitate towards structuralism. Here’s Rudy Raff in The Shape of Life: Genes, Development, and the Evolution of Animal Form

(a most excellent book on evolution and development, I recommend it highly), where he contrasts it with modern molecular genetic approaches.

One school of developmental biologists derides this gene-focused program as epiphenomenological. These “structuralists” envisage morphology as arising from the properties of physical rules that generate structure in developing systems. This is a long-standing perspective on development that arises from pre-Darwinian idealistic morphology and continued to be held by anti-Darwinists. J. Bell Pettigrew published a wonderfully illustrated three-volume treatise in 1908 entitled Design in Nature. Unlike modern structuralists, Pettigrew was arguing on behalf of “First Cause and Design.” Pettigrew based his argument for common rules of form in nature, such as the spirals present in nonliving and living structures. Thus, “the dendrites of minerals and metals, the frost pictures on window-panes and pavements in winter, the lightning flash, &c., are amazingly like the arborescent forms seen in the branches and leaves of plants and trees, the division and subdivision of blood-vessels and lymphatics, the branching of nerve cells…” and so on.

The core idea in structuralism is the importance of phenotypic interactions, rather than genetic control. Why do isolated cells tend to round up into spherical forms? It’s not because there are genes instructing them to do so, but because that’s a form that minimizes energy. Why do they flatten when they contact an adhesive surface? For the same reason. You don’t need to even mention genes. (Except, of course, that the adhesivity of certain surfaces is going to vary with the expression of specific cell surface molecules).

No modern structuralist would deny the importance of genetic regulation, but a lot of the old ones did. D’Arcy Wentworth Thompson pretty much denied this new-fangled genetics stuff any relevance at all — it’s all mathematical interactions all the way down — but let’s cut him some slack. He was schooled in biology before the rediscovery of Mendel, and published On Growth and Form

in 1917, when biologists were in the middle of a brawl over how genetics worked at all, and he was deep into his alternative model for the inheritance of form.

There was, after Thompson, a long period where many were seduced by the elegance of structuralism. It offered an explanation for how simple processes could generate complex and diverse patterns. Look at snowflakes, for instance: simple rules, simple molecules, all assembling into complex symmetrical patterns. If mere water can do that, then maybe there’s something equally simple underlying us…a kind of seed crystal for a human being.

One example for how people were thinking: many animals are segmented, that is, they have this repeating pattern of body elements reiterated sequentially along the length of the animal. Maybe, just maybe, there’s a molecule, a morphogen, that is expressed in an oscillating pattern, a kind of standing wave of simple molecule X that would explain the whole morphology. Wouldn’t that be cool? Turing’s reaction-diffusion model showed one way you could spontaneously generate a repeating pattern of stripes with just two molecules, and that was temptingly elegant. I’ve got a small collection of papers from the 1950s that are just that, theoretical explanations for how the whole insect body plan could be set up with a source at one end, a sink at the other, and a couple of simple, unidentified molecules diffusing and interacting chemically to make the pattern, with minimal genetic interaction.

These models all got blown to flinders as the actual mechanisms emerged: it was all differential gene expression controlled by intricate, Rube-Goldbergian regulatory logic. I’d argue that there are still vestiges of physical/chemical phenotypic interactions in the importance of epistatic interactions between genes products and genes, but it’s impossible to deny the centrality of genetic control any more.

I have another complaint about Larry’s treatment of structuralism. This is just plain wrong.

One of the problems with structuralist explanations is that they are very animal-centric.

No, they’re not. The most persuasive examples focus on single cells, which clearly have structure and form, but you can’t fall back on patterns of differential gene regulation to explain them. One of the late Brian Goodwin’s favorite examples was Acetabularia. Here’s what it looks like: 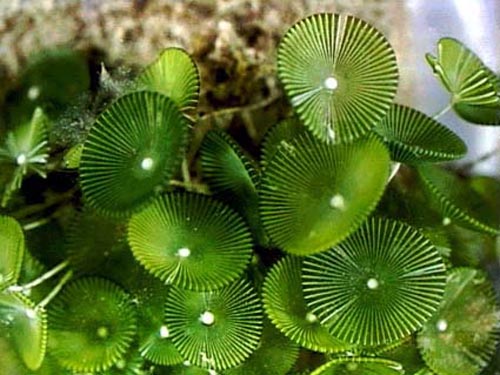 The mind-blowing thing about it is that that slender mushroom-shaped thing is a single algal cell. How does that work? You’re not going to be able to address it by just looking at what genes are present in the nucleus, down in the rhizoid. It’s going to demand a structuralist approach to puzzle out what kinds of interactions are going on inside the cell — there has to be some kind of patterning information being propagated through the cytoplasm. Reaction-diffusion, maybe? Some kind of radial streaming to make the cap?

But of course there is some kind of genetic control. There are also different species of Acetabularia, with different morphologies. One cool experiment that has been done is to snip off the caps of two species with distinctive shapes, and swap them. Gradually, the transplanted cap will assume the species-specific morphology of the host nucleus. So some genetic factors are clearly being transported from the rhizoid to the cap, where they then dance together to make a characteristic parasol.

That’s the interesting part about structuralism. The old-school extremist version is pretty much dead, along with Thompson and Goodwin, but there are valid questions still waiting to be answered. They just aren’t the questions creationists are asking.

Now evo-devo, though, does have a distinct bias towards multi-cellular animals (and Arabidopsis). But evo-devo isn’t really a descendant of structuralist thought — it’s more a scion of comparative molecular genetics. It’s a bit more mainstream. Likewise, the people I’ve known who have structuralist leanings (hi, Jay!) don’t deny genetics or evolution — far from it — but like to point out that there are patterning mechanisms beyond genetic switches, and that there are physical constraints on possible forms.

Caricaturing modern structuralism as being all about constraints that force humans to evolve on every planet is even more ridiculous than caricaturing modern molecular biologists as people who claim that biochemistry is irrelevant. I suppose people like that exist, but no one takes them even as seriously as they do Michael Denton.