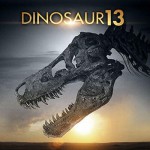 , so I’m going to recommend it to you all — it’s available on Amazon streaming video and Netlix. It’s the story of the fossil T. rex, Sue, and it’s enthralling and depressing.

The fun part is the beginning, when some commercial fossil hunters discover tyrannosaur bones eroding out of a hillside in South Dakota. I had some mixed feelings — those bones belong in a museum, not serving for profit! — but it’s clear that this team from the Black Hills Institute were pros, and were also skillful preparators. It’s a difficult balance, because while they are trying to make money selling specimens, it’s the nature of fossils that they really are just weathering out of the rocks, and if someone doesn’t collect them, they’ll just be lost rubble.

And Sue was an amazing find. The skeleton is 80% complete, and she was the largest of her species found to date. Peter Larson and his crew were enraptured.

Then the documentary turns grim. The law stepped in and argued that since it was found on federal land, the Black Hills Institute had no right to the specimen, and seized everything. It got tied up in an ugly legal wrangle for years. They decided that the rancher, Maurice Williams, who had let Larson dig up the skeleton for $5000 had no right to sell it either: he was leasing government land for his livestock, so it wasn’t his (apparently he hadn’t been paying for it, either).

There’s an incredible injustice. Larson is found guilty of not filling out some forms, and is given a punitive sentence of 2 years in federal prison. Sue is auctioned off for about $8 million dollars, and the money goes to…Maurice Williams? That part made no sense. It should have gone to paleontological research, if anything, not another lucky parasitic rancher who contributed nothing to the discovery.

At least Sue went to a good home, the Field Museum. And now I’m thinking that maybe this summer I’ll take a weekend drive out to the western side of South Dakota and visit the Black Hills Institute Museum.