The fish that forgot to evolve? Here’s the difference between observational and historical science: https://t.co/gDBi6iQhjh

The fish that forgot to evolve? Here’s the difference between observational and historical science: ow.ly/Ug1wU

If you bother to read the awful article, it includes a standard creationist canard: Coelacanths haven’t changed a bit over their long history, and this disproves evolution.

Well, this fish apparently forgot to evolve for 65 million years! You see, the living coelacanth is easily recognizable from the fossils. Despite having supposedly “primitive” features, many of these features not seen in any living vertebrates, this fish has survived basically unchanged for an alleged 70 million years.1 How is this possible?

Well, it’s a matter of interpretation. You see the fossil of the coelacanth is studied in the present—we observe it today. But what happened to make it a fossil is in the past—it’s historical science because we can’t directly test, observe, or repeat the past. So what you believe about the past is going to influence your interpretation of the evidence. In the case of the coelacanth, evolutionists have the presupposition that the fossil record shows Earth’s history over millions of years. So when they find this fossil that doesn’t have a living match today, they interpreted that fossil to have gone extinct millions of years ago. Now, the fossil itself didn’t tell them that. Their interpretation of that fossil through their evolutionary worldview drew that conclusion. And that conclusion turned out to be very wrong. Coelacanths were happily swimming deep in the ocean all along and were even being sold in fish markets, unbeknownst to scientists.

It’s wrong in a couple of ways. Stasis is also part of evolution, and natural selection typically acts conservatively, to cull variants from a successful norm. The basic coelacanth body plan hasn’t changed much, but then, coelacanths haven’t been particularly successful, either, and are now reduced to just two extant species.

When we find a fossil, we determine its age by its provenance, not by whether it looks like something that’s alive today. The reason coelacanth fossils were dated at 70 million years (or much older — they’ve been around for hundreds of millions of years) has nothing at all to do with comparing them to extant species, and then deciding that because we can’t find a modern example, it must have died a long time ago. That’s simply a lie by Ham. Those other species of coelacanth did go extinct millions of years ago.

And that’s the other problem with Ham’s half-assed analysis. There has been change within coelacanths.

Coelacanths are an order within the class Sarcopterygii, just like primates are an order within the class Mammalia. It was thought that the whole order went extinct at the end of the Cretaceous, and the discovery of Latimeria told us that one species of a large group had survived. If we humans manage to exterminate all gorillas, orangutans, chimpanzees, and gibbons, and then our lineage manages to survive for a long time afterwards, we’d be able to say that that unsuccessful clade of primates went extinct, except for one holdout. That does not, of course, imply that humans never evolved, or that all primates were the same.

As for his utterly bogus misuse of the distinction between historical and observational science, he’s got that all wrong. The death and relative stasis of a few remnant species was determined by observation of the evidence…evidence that dishonest frauds like everyone at Answers in Genesis ignore. Get into the literature, and you’ll discover lots of careful examination of the evidence to determine the evolutionary history of this order. Here’s an example: Earliest known coelacanth skull extends the range of anatomically modern coelacanths to the Early Devonian.

Coelacanths are known for their evolutionary conservatism, and the body plan seen in Latimeria can be traced to late Middle Devonian Diplocercides, Holopterygius and presumably Euporosteus. However, the group’s early history is unclear because of an incomplete fossil record. Until now, the only Early Devonian coelacanth is an isolated dentary (Eoactinistia) from Australia, whose position within the coelacanths is unknown. Here we report the earliest known coelacanth skull (Euporosteus yunnanensis sp. nov.) from the Early Devonian (late Pragian) of Yunnan, China. Resolved by maximum parsimony, maximum likelihood and Bayesian analyses as crownward of Diplocercides or as its sister taxon, the new form extends the chronological range of anatomically modern coelacanths by about 17 Myr. The finding lends support to the possibility that Eoactinistia is also an anatomically modern coelacanth, and provides a more refined reference point for studying the rapid early diversification and subsequent evolutionary conservatism of the coelacanths.

Note that when a scientist is talking about a conserved body plan, they are not claiming that there has been no evolutionary change. Rather, that a successful general form persists for a long time, but may contain many different species, each unique in its own way. After all, people and chimps are all the same in this broad sense of their shape and structure, but I think we’d all agree there are also significant (to us) differences.

But the observational science of paleontology is telling us that there are diverse species of coelacanths that radiated rapidly and then exhibited a notable degree of retained similarities. The paper digs deeper into the variety of coelacanths, and just the fact that they are making a distinction between anatomically modern coelacanths and primitive coelacanths should tell you right away that not all coelacanths are the same.

And even within the anatomically modern coelacanths, they describe distinct differences between species. 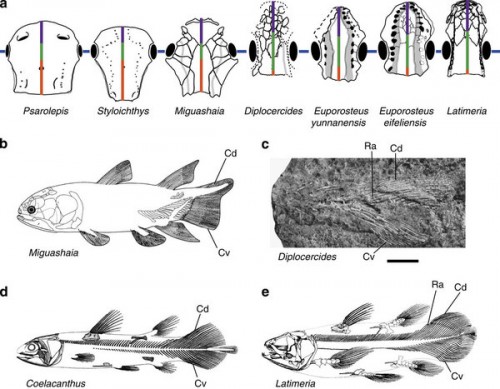 The body plan of anatomically modern coelacanths in comparison to that of primitive coelacanths and non-coelacanth sarcopterygians. (a) Parietonasal or parietal shields from selected sarcopterygians showing different proportions of preorbital, orbital and postorbital regions. Elongated preorbital portion (purple) and orbital portion (green) represent a derived feature characterizing Euporosteus and other anatomically modern coelacanths. Miguashaia resembles primitive sarcopterygians such as Psarolepis and Styloichthys in having elongated postorbital portion (red). Parietonasal or parietal shields drawn to comparable anteroposterior length and are not to scale. (b–e) Differences in caudal fin between anatomically modern coelacanths and primitive coelacanths. Miguashaia (b) resembles primitive rhipidistians such as Glyptolepis and Osteolepis in having a heterocercal tail. Diplocercides (c), Coelacanthus (d) and Latimeria (e) have a diphycercal or trilobed tail with symmetrically developed dorsal and ventral lobes. Illustrations not to scale. Cd, dorsal lobe of caudal fin; Cv, ventral lobe of caudal fin; Ra, endoskeletal radial. Scale bar, (c) 1 cm.

Here’s the thing, too: to pursue their bizarrely blinkered version of observational science, the know-nothings at AiG have to throw away a tremendous amount of evidence. The dates and species in this chart are not imaginary, but all backed up by lots of data, data that contradicts everything AiG believes in. 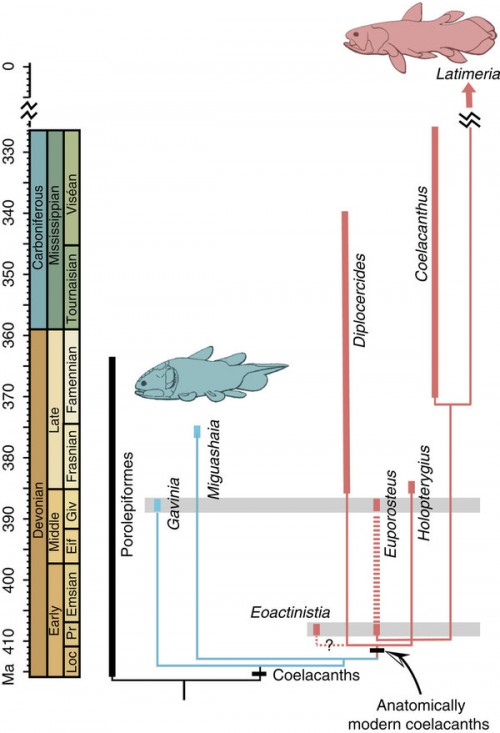 Friday Cephalopod: Whatever happened to the “NO CAPES!” rule? » « Looming weekend of labor and dread