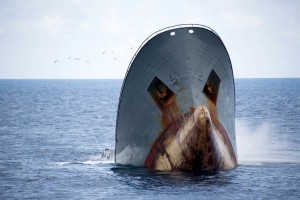 The Thunder was a criminal ship that was plundering international waters.

Banned since 2006 from fishing in the Antarctic, the Thunder had been spotted there repeatedly in recent years, prompting Interpol to issue an all-points bulletin on it in December 2013. The vessel was described as the most egregious of the ships then on its Purple Notice list, collecting over $76 million from illicit sales in the past decade, more than any other ship, according to agency estimates. The Thunder’s prime catch was toothfish, more popularly called Chilean sea bass, known on docks as “white gold” because its fillets often sell for $30 a plate or more in upscale restaurants in the United States.

The Thunder’s status as a fugitive hardly slowed it down. By keeping its locational transponder turned off, it could fish and then slip in and out of ports undetected. The ship’s name and port registry, which have changed more than a half-dozen times, were not painted on its hull, the typical practice, but on a metal sign hung from its stern. (Sailors call such signs “James Bond license plates” because they can be easily swapped out.) In March, the Thunder was stripped of its registration by Nigeria and became officially stateless, which meant that marine authorities from any country could board and arrest its crew.

“Sea Shepherd is doing what no one else will,” said Peter Whish-Wilson, an Australian senator. “The urgency of this problem has grown,” he added, “but the government response, from all governments really, has fallen.”

So the Sea Shepherd organization tracked them down and chased them across several oceans. Read the whole dramatic story.

And now I want to be a pirate hunter when I grow up.