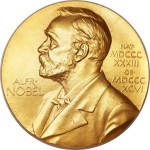 Poor, poor pitiful Tim Hunt. He’s now complaining about his treatment as a victim of the “savage power of Twitter”.

I am finished, he says. I had hoped to do a lot more to help promote science in this country and in Europe, but I cannot see how that can happen. I have become toxic. I have been hung to dry by academic institutes who have not even bothered to ask me for my side of affairs.

He does not make a convincing argument. His wife takes his side; he’s a good cook and has a nice garden; he was just being totally jocular, ironic (which is an odd thing to claim when even in his apology he said he meant it). Oh, and of course, it was just part of his upbringing. He went to a single-sex school in the 1960s, because no one ever escapes the harm done to them in their childhood, unless it’s sexual abuse, in which case they should just grow up and get over it. It’s basically a cry that everyone is being so mean to him…which is a bit ironic, given that he’s relatively wealthy, has a nice home, has international prestige, and has a Nobel prize.

Some people seem to find these claims mildly persuasive.

Hunt’s comments were foolish and hurtful. I’m sure he regrets making them, but a smart man should know better. That said, I think this situation raises some interesting questions. I’d love to hear what you think too.

OK! I always wait for permission to express my opinions.

I thought Hunt’s plaintive whines were a big bowl of bollocks. Look, I know people are complex and more than just their one stupid off-the-cuff remark — Hunt’s work on cell cycle regulation was important, and I’ve heard from more than one person that he was not a raging misogynist in his lab, but actually did a reasonable job mentoring both men and women. I am not suggesting that he be taken out and flogged and then get damned to an eternity in Hell, or even that he deserves that. But it is precisely a problem when we are so dazzled by that shiny Nobel that we think someone ought to be given a pass for some odious and harmful attitudes.

I don’t even think the following are interesting questions.

Did we make matters worse?
Hunt’s comments were made in a non-public venue. They were brought to the public via Twitter. Blogs and traditional media extended the story’s reach. It’s safe to say that the average young female aspiring scientist would never have heard about his comments had it not been for the rest of us repeating what he said. …and I mean ‘us’ because I shared a number of those stories on social media too. Expressing displeasure and correcting mistakes is important – but did we (the online scientific and academic community & media) exacerbate the situation?

What exactly was done to Tim Hunt? His own words were made public. It is not an excuse to say that if there were no Twitter, no “young female aspiring scientist” would have actually heard those words. Do we argue that if we quit using those fancy diagnostic tools, we wouldn’t be diagnosing cancer as early, so people would have a few more months of blissful ignorance?

Exposing bias is essential to correcting it. What happened here is that a shameful bit of sexism was brought into the light, and the perpetrator was mocked and publicly scorned, but there were no “lynch mobs” or “witch hunts”, those favored phrases of the indignantly exposed — there was open discussion of what should be done. And UCL made their own decision that his views failed to appropriately represent the goals of that university.

Could Hunt come out a winner?
Unlike the time when Matt Taylor wore “That Shirt” – there seems to be much stronger pushback from Hunt’s defenders. They are painting him as a victim of overzealous ‘tweeters’ and institutions they say rushed to judgment. He and his wife have have also refused to remain silent, opting to defend themselves publicly. Is it possible that this strategy could turn things in their favor?

Tim Hunt did not receive a sentence of life in prison. There is no specific act that needs to be retracted or changed — he is who he is, warty exterior and all. What possible outcome are you talking about? That he didn’t say those stupid things, stereotyping women? That the public will change and say that it’s perfectly OK that he stereotyped women? I hope not.

Another point here is that people are already placing the blame on “overzealous tweeters” or people who went overboard in mocking his stupid remarks. What do you want, for everyone to shut up and be silent? It’s not a problem if no one talks about it? It’s not a problem for the privileged people who promote sexism, but it’s always a problem, silent or not, for the people who are targeted by sexism. The concern here is misplaced; it’s because open discussion of the problem flips the table and exposes the ideas of the perpetrators to criticism.

Somehow, when that happens, there’s always a group of people who are perturbed by the disruption of the status quo and think we need to do something to curb the critics. They don’t seem to consider that maybe the status quo sucks.

Will scientists be less likely to go-public?
If some ill-advised comments at a conference can deep-6 the career of a Nobel Prize winner, will other researchers think twice before stepping up to a podium? How about doing media interviews? Aside from the obvious impact on women, will this incident serve as a setback for all of science communication?

There was no career getting deep-sixed. We’re talking about a 72 year old man with a collection of honorary positions who lost one; a man who thought his past laurels put him beyond question, and is now shocked that having a Nobel does not mean that he can say stupid things and be instantly forgiven. Talk to me when his grants, awarded for promised competencies in the lab, are retracted because he demonstrated social incompetence. These honorary positions are awarded specifically because the recipient is thought to add luster to the granting university. When the recipient does the opposite, it’s only fair that they be removed.

Are there researchers who don’t think twice before doing public lectures or media interviews? Then they shouldn’t be doing them.

If you’re concerned about science communication, then the harm was done when a prominent scientist stepped up to a microphone and suggested that women are too emotional and ought to be segregated into women-only labs.

Will other universities and scientific societies respond differently?
If Hunt worked for a U.S. university, I’m fairly certain he would have retained his position. The school may have expressed disagreement, but it would likely have stood up for academic freedom. Remember when Columbia University stood up for Dr. Oz after a group of doctors from across the country tried to get him fired for things he said?

I have academic freedom, too, but that doesn’t mean I am free of all possible consequences. I have a contract. As long as I do my job in the lab and classroom, I won’t be fired for expressing controversial opinions. I was not hired in a public relations move, but instead because I was considered a good teacher. So, yeah, if I don’t do my job, I’m out.

Hunt’s appointment at UCL was an honorary position — it actually was a PR appointment. His job was to be an ambassador for science and higher education, and he failed. I also suspect that there wasn’t a contract, or much of one, that granted him tenure as an honorary professor.

So when I speak out against religion in my private life, my university would have a tough time trying to fire me for that — that’s what academic freedom is all about, protecting the right of professors to speak their mind. If I’d had an honorary appointment at Liberty University — they’d been really thrilled with my work on grasshopper embryos 20 years ago — it would not infringe on my academic freedom if they retracted my non-paying title.

I don’t buy any of these arguments. What I see is a guy who did great work, was a competent scientist, who was lucky, hardworking, and privileged enough to win one of the highest honors you can be granted in science, who is now complaining that he’s being abused because people don’t like his hopelessly outdated and harmful ideas about women, or more charitably, that he’s an idiot when he gets in front of a microphone.

He was wrong. He couldn’t possibly stack up enough Nobels to change that simple fact.

Deborah Blum, who was at the conference, summarizes her meeting with Hunt. Yeah, he meant it.

You know, I don’t have a reputation for diplomacy or tact, but even I would not attend a Women’s Science and Technology Association meeting and babble about how women are weepy and difficult in the lab.

Michael Eisen says a lot of the same things I did.