Say you’ve discovered something you think is really neat-o. You decide to submit an abstract of your discovery to an unrefereed meeting.

So far, so good. This is something scientists do all the time, and then they get together and discuss and criticize.

Here’s the additional step you take if you’re a crackpot: you buy an advertisement in the Washington Post, announcing that you’ve overthrown all of physics in favor of a Seventh Day Adventist literal interpretation of the book of Genesis, and that pandemonium among big bang cosmologists is soon to come over this discovery, because the world will soon recognize the greatest cover-up ever conceived by physicists.

As a bonus, you also announce that you’ve discovered the location of God’s Throne. 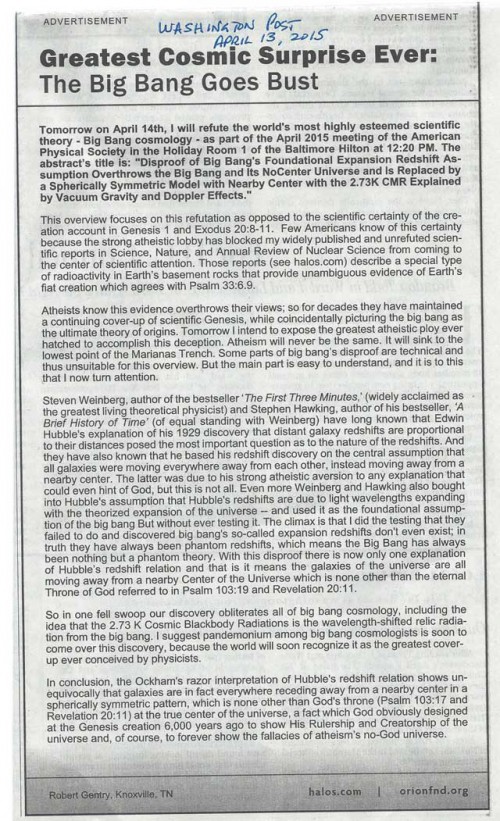 Just curious — were any readers at the American Physical Society meetings in Baltimore a few days ago? Was there pandemonium? I’m kinda imagining people in suits running around, tearing their hair out, leaping out of windows, clubbing each other in a battle to reach the coffee urn between sessions, that sort of thing. I suspect reality is far less bloody, though, and poor Robert Gentry probably disconsolately slogged back home with the sniggers of physicists in his ears.

Lunch with @ChrisWarcraft » « Beautiful and terrible