Cody Carson is an inventor, and he’s also one of those weird fundamentalists who believes in that load of unbiblical nonsense that is the Rapture (this is not to imply that if it were Biblical, it wouldn’t be nonsense). He has invented a device to detect when Christians magically disappear.

A Spring Clamp Switch was the type of vanishing sensor I built to demonstrate a working model of a Rapture Alarm in a demonstration given to a church congregation a few years ago. I used this type because it is easy to understand and can be built for less than $7. I purchased a medium size spring clamp and a pull chain switch from a local home center. I then drilled two holes in the handle of the clamp. I mounted the switch in one hole and mounted the pull chain in the other hole. Squeezing the clamp once cocked the switch. Releasing the handles cause the chain to be pulled, thus activating the switch. I then hooked the switch up to a light and placed the clamp onto a broom handle. When I snatched the broom handle out of the clamp, the light came on. When mounted to an arm or leg of a deceased Christian, the sensor would activate when the body vanishes, thus detecting the rapture.

In my demonstration, I clamped the sensor to a cow’s leg bone to represent a bone surgically removed from a Christian organ donor. This was to demonstrate that rapture related devises could be constructed in controlled lab settings and would not require the use of a grave or tomb. That sensor was wired to a computer tower and when the bone was removed from the clamp, the congregation heard an audible alarm.

A switch that triggers when you remove something is completely trivial to build, and hardly qualifies as an ‘invention’. But the absurdity of Carson’s thinking only slowly sank in. First I thought he was going to have Christians walking around with this switch attached, which would hardly be useful at all if the Rapture happened — his alarm could go off in all kinds of situations, while a person vanishing would be obvious and unusual, so all he’s doing is adding opportunities for false positives.

And then he mentions attaching it to dead bodies. Getting a bit creepy there…but OK, he believes the dead will vanish as well as the living. Still, his crude switch isn’t going to work: dead bodies do decompose and gradually vanish.

And then: a bone surgically removed from a Christian organ donor. Ewww.

So I keep reading along as his proposals get more elaborate and pseudoscientific.

Theoretically, a tomb could be constructed as a small lab resembling a hospital room with a patient. The “patient” or test subject, could be fitted with various types of sensors to record quantum changes that would occur during the resection and vanishing of a body. Because the bible says that the vanishing will happen instantly, the data would be recorded at an ultra high speed so that it could be slowed down for study. The data would have a ten second recording window and would store information in a similar manor as the rapture video recorder. Experiments that could be monitored from this tomb lab are not limited to but include: sound, EKG, moisture, bone density, body weight, movement, radiation, infrared light, body heat, room temperature, air pressure, RF radiation, white noise, fast time video, radar, etc.

I have no idea why he’s fussing over this BS. Doesn’t he expect to be raptured, and then he’ll know without all the gadgets?

But then I read this:

If the rapture is timed with the chain of natural disasters that have already been predicted by scientists for the 2010 – 2012 time frame, the fulfillment of the long predicted biblical prophesy could be partially overlooked because of the heavy death toll and mass destruction that would follow in the wake of multiple global disasters.

And I look at the date of the post: it’s from 2009. I guess I missed the chain of natural disasters predicted by scientists 3-5 years ago, and completely missed the vanishing of all those Christians. I guess we needed Carson’s gadgets after all.

Carson’s last post, by the way, was in 2012. At the end he was just dumping memes that never caught on, usually a photo of himself with some godly quote from himself attached, like this one: 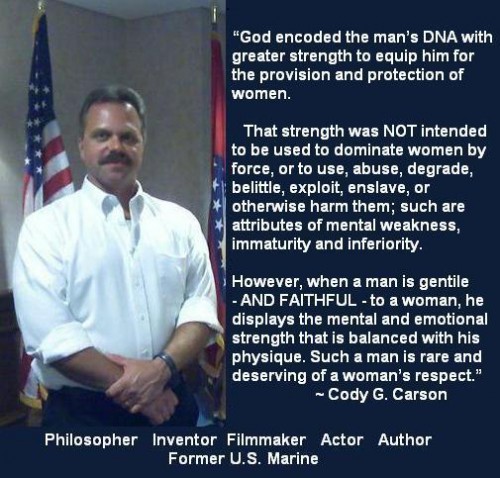 With wisdom like that, I’m sure he must have been sucked right up into heaven.

I approve this message » « Malice and incompetence?