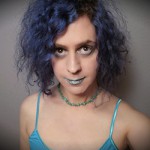 Many of us are familiar with The Brick Bible, retellings of Bible stories using Lego bricks. The author made a stunning announcement on facebook today.

I have chosen today, the Transgender Day of Visibility to officially introduce myself to the world as a transgender woman. Earlier this month my name was legally changed from Brendan Powell Smith to Elbe Spurling, and my gender legally recognized as female. Some of you may be wondering why I would choose to publicize this personal information, and the answer is this:

Transgender people face an uphill battle for equal treatment and protection of their rights. In our society today there are many unkind prejudices and dehumanizing biases against transgender people that go unchallenged. When we transgender individuals hide ourselves, it plays into the hands of those who dislike us and seek to spread fear of us. It leaves such people’s negative and hostile image of us as the only image of ourselves that the general population sees. The point of the Transgender Day of Visibility is to combat that image by presenting ourselves as we are.

So, hello. I’m Elbe Spurling, a blue-haired transgender, lesbian, atheist artist and author of LEGO-illustrated religion and history books. I’m also a nice person trying to do some good in the world while I’m around.

I am very fortunate. Compared to the vast majority of transgender people, my life circumstances are such that my transition has been relatively easy so far. My family and friends have been entirely supportive and loving. The amount of resistance and harassment I have received from others to date has been minimal. I realize that coming out may change all that. It still feels like the right thing to do.

41% of people who are transgender or gender-nonconforming have attempted suicide sometime in their lives. That’s nearly nine times the national average. Out of those who had been turned away by a doctor because they were transgender or gender-nonconforming, 60% had attempted suicide sometime in their lives. If my coming out can do anything to shift society’s baseline of tolerance toward greater compassion and love, if it can broaden people’s minds about what they think of when they think of transgender people, if it can offer a smidgen more hope to transgender people despairing that they can never lead a happy, successful life, then my coming out feels completely worth it and right.

There are close-minded people out there who have already made claims that because I am an atheist, I must therefore be morally evil, cruel, and/or in league with the Devil (don’t believe me? read the reviews of my books on Amazon). Coming out as also transgender probably isn’t going to win me any new friends among this set. I’m not sure anything I can do would change the minds of people whose thinking is so set in its ways. But for everyone else, I ask that you extend to me and other transgender people the same benefit of the doubt you’d offer any other group of people–that we are kind, decent human beings unless our individual actions show otherwise.

I will likely continue to publish books under the name Brendan Powell Smith since it has become something of a marketable brand. Moreover, (unlike some who transition) I feel a full sense of continuity with my past identity. But in just about all other cases in my life, I will be going by my newly updated legal name and gender, and I will not be keeping my identity a secret. http://brendanpowellsmith.com/ will now redirect to http://elbespurling.com/ Thank you for your attention in this matter and for your continued fandom and support of my creative projects./p>

You can read more about her at ElbeSpurling.com.

Oh, and what was stunning about that announcement? A whole lot of people in the facebook comments are shocked that Elbe is…an atheist! Here’s one example:

How does one who does not believe in God, write and edit books about God? I was just about to buy your brick testiment books but now that I know you don’t believe in God, I won’t . Your life choices are yours, just like mine are, we will all one day stand before the throne of God and give account to Him, for He will judge the hearts of mankind alone. Just dissapointed that bout the athiest part, since your job its basically about testifying and depicting God and Bible History in legos. Kinda contradictory and a conflict of interest don’t you think. Otherwise, your brilliant and materful in your craft, God Bless.

How very strange. How could you have not read the Brick Bible and seen that it was revealing the perversity and awfulness of the Bible?