Ken Ham claims to have been reading the science news. Oh, really?

Sometimes when I read the science news I just have to laugh. It seems that secular scientists are willing to believe anything, no matter how ridiculous, rather than admit the truth that they know in their hearts. There is a Creator (Romans 1:20–21). Well, in the news recently there was a story about scientists from the UK who reportedly found a “tiny metal circular object” in Earth’s stratosphere, and they are now “suggesting it might be a micro-organism deliberately sent by extraterrestrials to create life on Earth.”

Just that description makes me skeptical that this is coming from scientists. So I followed his sources.

He got it from the Huffington Post. Already you’re dubious. The HuffPo is a hive of scabrous stupidity; it’s where left-wingers go to prove they’re no more intelligent than right-wingers, out of a sense of egalitarian niceness, no doubt.

The HuffPo article repeats the nonsense about a particle from aliens. Here’s an electron micrograph of it. 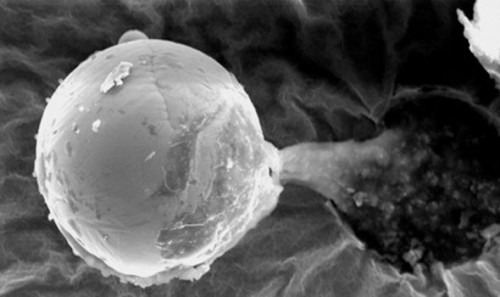 They’ve got to be joking. Electron microscopists know you can find all kinds of funny-looking, uninterpretable objects at those scales — that looks nothing like a micro-organism, and they’re overinterpreting junk in the field of view. Who is the source for this nonsense?

It’s the University of Buckingham. I have mixed feelings about that: yes, it’s a real university. But it’s a university that employs raving crank Chandra Wickramasinghe as the head of the Buckingham Centre for Astrobiology. And sure enough, this comes from Milton Wainwright and Wickramasinghe.

But this silly photo and claim made the news at the University of Buckingham Centre for Astrobiology. It must have been published somewhere, right? Yep. The news article cites a source, one source: the Daily Express.

Call me gobsmacked and slap me with a mackerel. This is university PR, and they cite publication in the Daily fucking Express? This is something of a new low for university public relations departments. Imagine if an American university were to trumpet a scientific discovery for getting published, and published only, in the National Enquirer. This is not something to be proud of. This should be a source for considerable embarrassment. In fact, the only thing more embarrassing is bragging about publishing in the Journal of Cosmology, as other news articles do.

Here’s the Daily Express article. It also features a video about the “top ten facts about UFOs”, and on the sidebar, touts articles about a three-breasted woman, a stained-blass window that shows that Jesus was a ginger, and a grandmother towing a car with her teeth.

I did learn one useful thing from the Buckingham site. There’s another astrobiology journal: The Journal of Astrobiology & Outreach, and Wickramasinghe and Wainwright are publishing lots there. I checked out the current issue. It’s got six articles. Three of them are authored by Wickramasinghe. Who is the editor-in-chief? Chandra Wickramasinghe. You know, even without knowing what a shameless hack Wickramasinghe is, that fact alone should light up ethics alerts all over the place.

But back to Ken Ham: No, Kenny-boy, you weren’t reading “science news”. You were reading tabloid schlock on a disreputable website.

I know, you don’t know the difference.